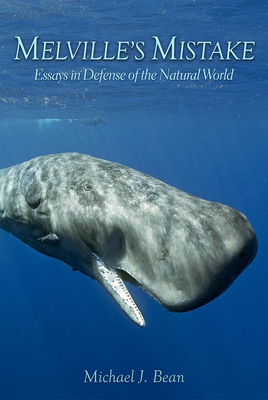 In 1977, Michael J. Bean introduced the concept of “wildlife law” as a distinct new component of environmental law. Known thereafter as the “dean of wildlife law,” Bean has since written scores of articles shaping the policies that impact the natural world. Melville’s Mistake: Essays in Defense of the Natural World is built around a collection of those writings, both previously published and unpublished, with a principal focus on the Endangered Species Act—the legislative cornerstone of conservation and recovery efforts for imperiled wild plants and animals in the United States.

The background to that pioneering law, many of the conflicts and controversies associated with it—some widely familiar and others not—and the challenge of fashioning effective approaches to rare species conservation are all addressed here. So too are related topics, including administration of National Wildlife Refuges, plastic pollution, and climate change. The collection also highlights individuals who have made significant contributions to wildlife conservation.

This collection not only chronicles the evolving history of wildlife law—and of Bean’s views about it—but also helps those new to the field to understand the issues and their resolutions. As Carl Safina notes in the foreword, “Michael Bean is a student of what has worked and what has not, someone willing to explore new approaches to solving conservation challenges. That stance has something fundamental to teach anyone aspiring to be a great and influential practitioner, or professor, or both.”

MICHAEL J. BEAN has served as chair of the Environmental Defense Fund’s wildlife program and was principal deputy assistant secretary for fish and wildlife and parks at the Department of the Interior under the Obama administration. He is the author of The Evolution of National Wildlife Law, and his writing has appeared in Smithsonian, Quarterly Review of Biology, Orion, Environmental Law Reporter, Nature, The Washington Post, Los Angeles Times, and other publications. He resides in Washington, DC.