The Divorce Colony: How Women Revolutionized Marriage and Found Freedom on the American Frontier (Compact Disc) 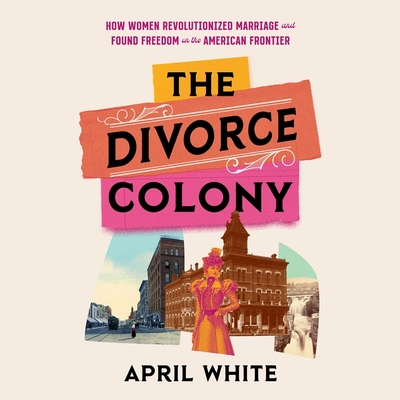 From a historian and senior editor at Atlas Obscura, a fascinating account of the daring nineteenth-century women who moved to South Dakota to divorce their husbands and start living on their own termsFor a woman traveling without her husband in the late nineteenth century, there was only one reason to take the train all the way to Sioux Falls, South Dakota, one sure to garner disapproval from fellow passengers. On the American frontier, the new state offered a tempting freedom often difficult to obtain elsewhere: divorce. With the laxest divorce laws in the country, five railroad lines, and the finest hotel for hundreds of miles, the small city became the unexpected headquarters for unhappy spouses--infamous around the world as THE DIVORCE COLONY. These society divorcees put Sioux Falls at the center of a heated national debate over the future of American marriage. As clashes mounted in the country's gossip columns, church halls, courtrooms and even the White House, the women caught in the crosshairs in Sioux Falls geared up for a fight they didn't go looking for, a fight that was the only path to their freedom.In The Divorce Colony, writer and historian April White unveils the incredible social, political, and personal dramas that unfolded in Sioux Falls and reverberated around the country through the stories of four very different women: Maggie De Stuers, a descendent of the influential New York Astors whose divorce captivated the world; Mary Nevins Blaine, a daughter-in-law to a presidential hopeful with a vendetta against her meddling mother-in-law; Blanche Molineux, an aspiring actress escaping a husband she believed to be a murderer; and Flora Bigelow Dodge, a vivacious woman determined, against all odds, to obtain a dignified divorce.Entertaining, enlightening, and utterly feminist, The Divorce Colony is a rich, deeply researched tapestry of social history and human drama that reads like a novel. Amidst salacious newspaper headlines, juicy court documents, and high-profile cameos from the era's most well-known players, this story lays bare the journey of the turn-of-the-century socialites who took their lives into their own hands and reshaped the country's attitudes about marriage and divorce.