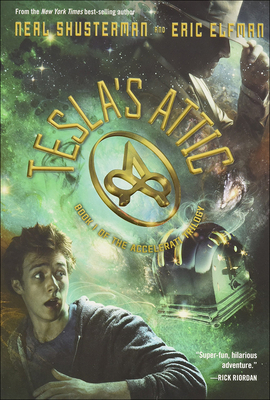 After their home burns down, fourteen-year-old Nick, his younger brother, and their father move into a ramshackle Victorian house they've inherited. When Nick opens the door to his attic room, he's hit in the head by a toaster. That's just the beginning of his weird experiences with the old junk stored up there. After getting rid of the odd antiques in a garage sale, Nick befriends some local kids-Mitch, Caitlin, and Vincent-and they discover that all of the objects have extraordinary properties. What's more, Nick figures out that the attic is a strange magnetic vortex, which attracts all sorts of trouble. It's as if the attic itself has an intelligence . . . and a purpose.
Ultimately Nick learns that the genius Nikola Tesla placed the items-his last inventions-in the attic as part of a larger plan that he mathematically predicted. Nick and his new friends must retrieve everything that was sold at the garage sale and keep it safe. But the task is fraught with peril-in addition to the dangers inherent in Tesla's mysterious and powerful creations, a secret society of physicists, the Accelerati, is determined to stop Nick and alter destiny to achieve its own devious ends. It's a lot for a guy to handle, especially when he'd much rather fly under the radar as the new kid in town.
Fans of intrigue, action, humor, and nonstop surprises are guaranteed a read unlike any other in Tesla's Attic, Book One of the Accelerati Trilogy.
Praise for Tesla's Attic
"Lively, intelligent prose elevates this story of teenagers versus mad scientists, the third-person point of view offering a stage to various players in their play of galactic consequence. A wild tale in the spirit of Back to the Future, with a hint of Malamud's The Natural tossed in."--Kirkus Reviews
"This collaboration between Shusterman and Elfman tempers the scarier elements of Nick's quest with deft, humorous writing and plenty of the ordinary adventures of a new kid in school finding his niche. Hand this one to fans of Rick Riordan's Kane Chronicles or Kenneth Oppel's Airborne."--Booklist
* ..".Shusterman and Elfman have crafted a plot more devious, characters far quirkier, climaxes (yes, there are two) more breathless, and a narration much, much funnier than recent mad-science offerings. Sticking with a third-person narration frees the authors to be as wryly and sophisticatedly witty as they please without compromising the veracity of their middle-school cast, resulting in storytelling as delightful as the story being told."
-Bulletin for the Center for Children's Books (starred review)

Neal Shusterman (www.nstoryman.com) is the author of thirty books for young readers, including the best-selling Unwind and Skinjacker trilogies, and the critically acclaimed The Schwa Was Here and Downsiders. As a screen and TV writer, Neal created scripts for the "Goosebumps" and "Animorphs" TV series, and he wrote the Disney Channel Original Movie "Pixel Perfect." Neal has two grown sons and he lives with his two daughters in Southern California.

Eric Elfman (www.elfmanworld.com) is a screenwriter, a professional writing coach, and the author of several books for children and young adults, including "The Very Scary Almanac" and "The Almanac of the Gross," "Disgusting & Totally Repulsive"; three "X-Files "novels; and two books of scary short stories, "Three-Minute Thrillers" and "More Three-Minute Thrillers." He has sold screenplays to Interscope, Walden Media, Revolution, and Universal Studios. He lives in Brandywine Canyon, California with his wife and son.