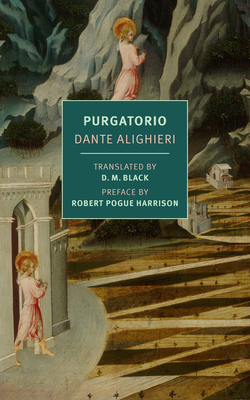 A new translation of Dante's Purgatorio that celebrates the human elements of the second part of The Divine Comedy. This is a bilingual edition with an illuminating introduction from the translator.

Purgatorio, the middle section of Dante’s great poem about losing, and subsequently finding, one’s way in the middle of one’s life is, unsurprisingly, the beating heart of The Divine Comedy, as this powerful and lucid new translation by the poet D. M. Black makes wonderfully clear.

After days spent plumbing the depths of hell, the pilgrim staggers back to the clear light of day in a state of shock, the sense of pervasive dread and deep bewilderment with which he began his pilgrimage as intensified as it is alleviated by his terminal vision of evil. The slow and initially arduous climb up the mount of Purgatory that ensues, guided as always by Virgil, his poetic model and mentor, is simultaneously a reckoning with human limits and a rediscovery of human potential in the light of divine promise.

Dante’s Purgatorio, which has been an inspiration to poets as varied as Shelley and T. S. Eliot, is a book full of human stories and philosophical inquiry; it is also a tale of individual reintegration and healing.

Black, a distinguished psychoanalyst as well as a poet, provides an introduction and commentary to this masterpiece by Dante from a contemporary point of view in this bilingual edition.

Dante Alighieri’s (1265–1321) most famous works are The New Life, which is available in the NYRB Poets series in a translation by Dante Gabriel Rosetti; De vulgari eloquentia, a defense of the use of the vernacular in literature; and his epic vision of the afterlife, The Divine Comedy. NYRB Classics also publishes Dante’s Inferno in a translation by Ciaran Carson.

Robert Pogue Harrison is a critic, radio host, and the Rosina Pierotti Professor in Italian Literature at Stanford University. His most recent book is Juvenescence: A Cultural History of Our Age.

“A great work of art like The Divine Comedy carries in it what readers in successive generations feel to be its ‘modernity’: what it says to us, now. David Black, a poet and psychoanalyst, by his translation, introduction, and notes, helps us into that enormous benefit. He enables Dante into our present lives.” —David Constantine

“David Black’s Purgatorio offers fresh insight into Dante’s poetry. We encounter a Dante whose psychological acumen is surprisingly relevant to us today. We are invited to read the Purgatorio as a journey of discovery: Dante’s discovery of his gifts and limitations; and through that, our discovery of resources that can help us address some of the pressing challenges of our time.” —Vittorio Montemaggi

“David Black’s translation of the Purgatorio unites psychological insight and intuitive understanding with scholarship and love of language.” —Ronald Britton

“[Dante’s] art and its truths feel more necessary than ever: that greater love for others is an antidote to the world’s barbarities, that evil may be understood as a sin against love, and that a soul can’t hope to dispel its anguish without first plumbing it. . . . D.M. Black’s Purgatory is the most satisfying since [W.S.] Merwin’s. . . [A] thoughtful rendering.” —Judith Thurman, The New Yorker

“The Inferno has long been more widely read than the Purgatorio. . . The Purgatorio, however, is a more satisfying whole. The structure is more meaningful, the verbal music more delicate—and, above all, it is more human. . . . Both in this translation and in his afterword, [D.M.] Black shows us why Dante matters, and how, 700 years after his death, he can still help us to understand what may give meaning to our own lives.” —Robert Chandler, Financial Times

“People who haven’t read Dante will find D. M. Black’s translation of Purgatorio a revelation. Those who know the Commedia already will find it a valuable addition to established versions. . . What’s immediately obvious is how much more propulsive Black’s version is. His syntax doesn’t pause at line endings, it catapults us over them.” —Edmund Prestwich, London Grip

“Black’s translation is well worth reading for its beauties as well as its fidelity to Dante’s text and intentions. It joins the array of worthy Purgatorio translations, which is more than making up for the first five hundred years of little or nothing to choose from.” —Andrew Frisardi, Plough Quarterly