The Firemaker (The China Thrillers #1) (Paperback) 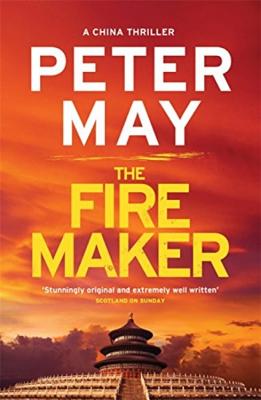 By Peter May
This item is not available.
Out of Print

This is book number 1 in the The China Thrillers series.

The first of Peter May's electrifying China Thrillers, featuring Beijing detective Li Yan and American forensic pathologist Margaret Campbell--and the explosive chemistry between them.
"Stunningly original." --Scotland on Sunday
"Highly recommended." --Larry Gandle, Deadly Pleasures
"A fascinating look at the new China." --Kirkus Reviews
A grotesquely burned corpse found in a city park is a troubling mystery for Beijing detective Li Yan. Yan, devoted to his career as a means of restoring the respect his family lost during the Cultural Revolution, needs outside help if he is to break the case.

The unidentified cadaver in turn provides a welcome distraction for forensic pathologist Margaret Campbell. Campbell, married to her work and having left America and her broken past behind, throws herself into the investigation and before long uncovers a bizarre anomaly.

An unlikely partnership develops between Li and Campbell as they follow the resulting lead. A fiery and volatile chemistry ignites, exposing not only their individual demons, but an even greater evil--a conspiracy that threatens their lives, as well as those of millions of others.

Peter May was born and raised in Scotland. He was an award-winning journalist at the age of twenty-one and a published novelist at twenty-six. When his first book was adapted as a major drama series for the BCC, he quit journalism and during the high-octane fifteen years that followed, became one of Scotland's most successful television dramatists. He created three prime-time drama series, presided over two of the highest-rated serials in his homeland as script editor and producer, and worked on more than 1,000 episodes of ratings-topping drama before deciding to leave television to return to his first love, writing novels.

He has won several literature awards in France, received the USA's Barry Award for The Blackhouse, the first in his internationally bestselling Lewis Trilogy; and in 2014 was awarded the ITV Specsavers Crime Thriller Book Club Best Read of the Year award for Entry Island. Peter now lives in southwest France with his wife, writer Janice Hally.

Longlisted for the CWA Dagger in the Library Award, 2018

"The Firemaker is a remarkably detailed picture of daily life in Beijing with all of its Big Brother rules and rewarded propensity to report all activities which may fall out of the ordinary. If a look into Chinese culture is your quest, look no further. if you like a good romance, it's right here. And if you can't resist a whodunit, yes, the murders do get solved. It's messy, it's unexpected, and it's all a part of an extremely well-written book."
—Danny Lindsey, Killer Nashville

Praise for Peter May
"Peter May is an author I'd follow to the ends of the earth."—Marilyn Stasio, The New York Times

"He is a terrific writer doing something different."
—Mark Billingham, bestselling author of the Tom Thorne series

"From the first page I knew I was in safe hands. I knew I could trust this writer."—Sophie Hannah, bestselling writer of The Monogram Murders