Unaccountable: How the Establishment Corrupted Our Finances, Freedom and Politics and Created an Outsider Class (Paperback) 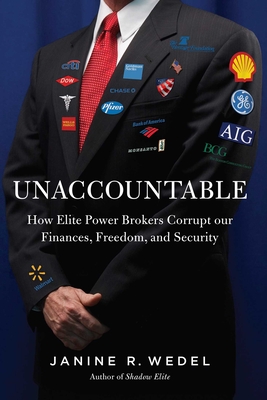 By Janine Wedel
This item is not available.
Out of Print

From the Tea Party to Occupy Wall Street, however divergent their political views, these groups seem united by one thing: outrage over a system of power and influence that they feel has stolen their livelihoods and liberties. Increasingly, protesters on both ends of the political spectrum and the media are using the word “corrupt” to describe an elusory system of power that has shed any accountability to those it was meant to help and govern.But what does corruption and unaccountability mean in today’s world? It is far more toxic and deeply rooted than bribery. Foreign governments with a history of human rights violations, military coups, and more, hire American public relation firms to suppress reports and search results for their crimes. Investigative journalism has been replaced by "truthiness." From Super PACs pouring secret money into our election system, to companies buying better ratings from Standard & Poors, or the extreme influence of lobbyists in congress, all are embody a “new corruption” and remain unaccountable to our society’s supposed watchdogs, which sit idly alongside the same groups that have brought the government, business and much of the military in to their pocket.

Janine Wedel is the author of Shadow Elite (Basic Books). Wedel has written for the New York Times, Financial Times, Washington Post, The Nation, Los Angeles Times, Christian Science Monitor, Boston Globe, Politico, and Salon, among others. She is a professor in the School of Public Policy at George Mason University and has been a senior research fellow at the New America Foundation.

Slow but steady cultural shifts often go unremarked until we suddenly realize that we are in a place we really do not want to be. This book draws attention to one such shift. Wedel documents an alarming increase in the number of individuals and associations who, while purportedly acting in the public’s interest, seem actually to be pursuing their own objectives.

For political junkies and those in the Left and Right tails, there will be plenty to like in this book that will confirm their worst fears. The book is engaging—and frightening.

A clarion call against some insidious threats to a healthy democracy.

Of huge value. Wedel has reinvented the study of public administration for an era of blurred roles and secret networks. A must-read for the age of flexians and truthiness.
— James K. Galbraith, author of The Predator State