Mask of the Sun: The Science, History and Forgotten Lore of Eclipses (Hardcover) 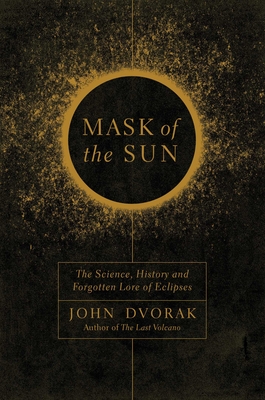 By John Dvorak
This item is not available.
Hard to Find

They have been thought of as harbingers of evil as well as a sign of the divine. Eclipses—one of the rarest and most stunning celestial events we can witness here on Earth—have shaped the course of human history and thought since humans first turned their eyes to the sky.

What do Virginia Woolf, the rotation of hurricanes, Babylonian kings and Einstein’s General Theory Relativity all have in common? Eclipses. Always spectacular and, today, precisely predicable, eclipses have allowed us to know when the first Olympic games were played and, long before the first space probe, that the Moon was covered by dust.

Eclipses have stunned, frightened, emboldened and mesmerized people for thousands of years. They were recorded on ancient turtle shells discovered in the Wastes of Yin in China, on clay tablets from Mesopotamia and on the Mayan “Dresden Codex." They are mentioned in Homer’s Iliad and Odyssey and at least eight times in the Bible. Columbus used them to trick people, while Renaissance painter Taddeo Gaddi was blinded by one. Sorcery was banished within the Catholic Church after astrologers used an eclipse to predict a pope’s death.

In Mask of the Sun, acclaimed writer John Dvorak the importance of the number 177 and why the ancient Romans thought it was bad to have sexual intercourse during an eclipse (whereas other cultures thought it would be good luck). Even today, pregnant women in Mexico wear safety pins on their underwear during an eclipse. Eclipses are an amazing phenomena—unique to Earth—that have provided the key to much of what we now know and understand about the sun, our moon, gravity, and the workings of the universe.

Both entertaining and authoritative, Mask of the Sun reveals the humanism behind the science of both lunar and solar eclipses. With insightful detail and vividly accessible prose, Dvorak provides explanations as to how and why eclipses occur—as well as insight into the forthcoming eclipse of 2017 that will be visible across North America.

Originally trained as a lunar scientist, John Dvorak, PhD, spent twenty years operating a large telescope at Mauna Kea for the Institute for Astronomy, University of Hawaii.  His writing has appeared as cover stories for Scientific American, Astronomy and Physics Today.  His books include Earthquake Storms and The Last Volcano, both available from Pegasus Books.

"For a more expansive look at how eclipses have been mythologized throughout history, turn to Mask of the Sun. John Dvorak offers useful, engaging background, as well as a deeper understanding of what to expect this August."
— New York Times

"Dvorak’s meticulously researched book covers the history of human reactions and interpretations from Homer to the Bible and beyond. He doesn’t skimp on the science, either; Mask of the Sun is a well rounded, entertaining, and authoritative survey."
— Omnivoracious

"If a simple alignment of astronomical bodies can move a 21st-century scientist to tears it’s perhaps not surprising that eclipses of the sun and moon have haunted the human imagination since our species first looked up at the sky. Mask of the Sun charts the history of this obsession through dozens of stories and anecdotes that illustrate how deeply embedded eclipse lore is in cultures across the world."
— The Spectator (UK)

"This book provides an excellent overview of how eclipses work and how people have interpreted them through time. Dvorak explains complex scientific ideas succinctly and clearly without resorting to formula or jargon. Furthermore, he does an excellent job of conveying the wonder of eclipses, describing both their historical-cultural value and the inspirational effect they have on people. A splendid introduction to all aspects of eclipses; for all readers interested in science. "
— Library Journal (starred)