Das Arkansas Echo: A Year in the Life of Germans in the Nineteenth-Century South (Hardcover) 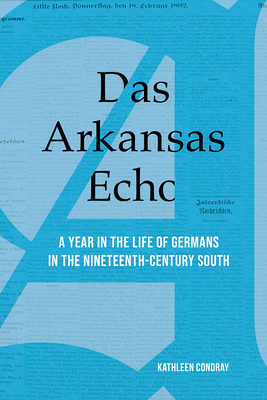 By Kathleen Condray
$39.95
Email or call for price.

In the late nineteenth century, a thriving immigrant population supported three German-language weekly newspapers in Arkansas. Most traces of the community those newspapers served disappeared with assimilation in the ensuing decades—but luckily, the complete run of one of the weeklies, Das Arkansas Echo, still exists, offering a lively picture of what life was like for this German immigrant community.

“Das Arkansas Echo”: A Year in the Life of Germans in the Nineteenth-Century South examines topics the newspaper covered during its inaugural year. Kathleen Condray illuminates the newspaper’s crusade against Prohibition, its advocacy for the protection of German schools and the German language, and its promotion of immigration. We also learn about aspects of daily living, including food preparation and preservation, religion, recreation, the role of women in the family and society, health and wellness, and practical housekeeping. And we see how the paper assisted German speakers in navigating civic life outside their immigrant community, including the racial tensions of the post-Reconstruction South.

“Das Arkansas Echo”: A Year in the Life of Germans in the Nineteenth-Century South offers a fresh perspective on the German speakers who settled in a modernizing Arkansas. Mining a valuable newspaper archive, Condray sheds light on how these immigrants navigated their new identity as southern Americans.

Kathleen Condray is associate professor of German at the University of Arkansas. The author of Women Writers of the Journal “Jugend” from 1919–1940, Condray has published numerous articles on migration and national identity. She is the recipient of two Fulbright awards, an NEH grant, and several national teaching awards.

“Kathleen Condray shines a light on Arkansas’s mostly Roman Catholic German immigrants, a group generally left out of the broader narrative about a state that was overwhelmingly Protestant and native-born. Not only does the book fill a gap but it also shows us how these German speakers viewed the issues the state faced in the late 1800s.”
—Kenneth C. Barnes, author of Anti-Catholicism in Arkansas