The Academy and the Award: The Coming of Age of Oscar and the Academy of Motion Picture Arts and Sciences (Hardcover) 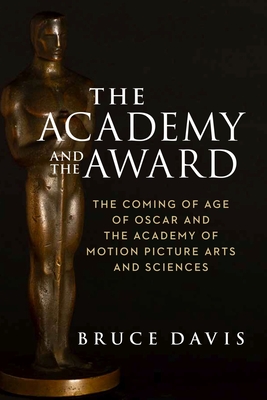 The first behind-the-scenes history of the organization behind the Academy Awards.

For all the near-fanatic attention brought each year to the Academy Awards, the organization that dispenses those awards—the Academy of Motion Picture Arts and Sciences—has yet to be understood. To date, no one has ever produced a thorough account of the Academy’s birth and its awkward adolescence, and the few reports on those periods from outside have always had a glancing, cursory quality. Yet the story of the Academy’s creation and development is a critical piece of Hollywood’s history.

Now that story is finally being told. Bruce Davis, executive director of the Academy for over twenty years, was given unprecedented access to its archives, and the result is a revealing and compelling story of the men and women, famous and infamous, who shaped one of the best-known organizations in the world. Davis writes about the Academy with as intimate a view of its workings, its awards, and its world-famous membership. Thorough and long overdue, The Academy and the Award fills a crucial gap in Hollywood history.

Bruce Davis joined the Academy staff in 1981, after serving as Theater Department chair at Juniata College. He was the organization's Executive Director for twenty years, overseeing the establishment of one of the world's great film archives and finding handsome new quarters for the Academy's Herrick Library. Davis has described his tenure as "thirty years among the masters of an art form." He lives in Los Angeles.

"A fond look at the genesis and growing pains of the world’s foremost film organization."
— Kirkus

"The story of the first 50 years (1927–77) of the Academy of Motion Picture Arts is fascinating, and the Academy’s former executive director Davis (who worked there for 30 years) is the ideal person to write it…  A book of wide appeal, starting but not ending with film buffs."
— Library Journal

“In this engrossing behind-the-scenes look at the Academy of Motion Picture Arts and Sciences and the work it does during all five seasons—ahem, including awards—by a former Academy executive director, the real nights and bolts of how the Hollywood machine works is explained in insightful, and sometimes deliciously dishy detail.”
— Town and Country

"Film historians and others digging for a deeper vein of Oscar knowledge than mere trivia will turn up many nuggets in The Academy and the Award, which focuses on the initial three decades in the corporate life of the sword-wielding statuette. Oscar would be lucky to have as keen and even-handed a historian as Davis to explore its next era."
— US News & World Report

"That this Hollywood institution survived its first tumultuous decade is a tale which Davis recounts with wit and discernment. His erudition is icing on the cake: what could have been dry and academic is instead a highly readable book that can lay claim to being definitive."
— Leonard Maltin's blog

"After serving as executive director of the Academy for over 20 years, Bruce Davis has penned the definitive history of the Academy Awards, from their awkward inception to the present. Davis was granted unprecedented access to the Academy archives for this compelling read about the way the Oscars work."
— Yahoo News

"If you happen to care about the history of the Academy of Motion Picture Arts and Sciences (at least in its first fifty years), you’ll have no shortage of reasons to read Bruce Davis’ forthcoming book, The Academy and the Award."
— Deadline

“With a discerning eye and a wealth of experience, Bruce Davis transforms what could have been dry and academic into an erudite and witty saga. He buries a number of myths and rumors surrounding the Oscars, and reveals how the organization survived its chaotic early years. The Academy and the Award is a major contribution to Hollywood history—and a great read.”
— Leonard Maltin, film critic and historian

“Wide ranging in his objective perspective, but always humanly intimate, Davis examines the in-house records of the Board of Governors, memos of its Presidents, and letters from the Academy’s more activist members, with much added flavoring and gossip. Davis’s seminal history of the Academy of Motion Picture Arts and Sciences reads with all the honed stagecraft and drama of an Oscar nominated screenplay.”
— John Bailey, cinematographer; Academy President 2017-2019

“In this entertaining, well-researched history, Bruce Davis traces how a marginal organization that teetered on the brink of bankruptcy for years became a major cultural institution that awards a coveted prize.”
— Charles Solomon, author of The Man Who Leapt Through Film

“There are few people who know (and can explain) the inner machinations of The Academy of Motion Picture Arts and Sciences, but if anyone can do it, Bruce Davis is that man. I am thrilled that there is finally a serious history of the organization and the people behind it, with names that you'll recognize and those you won't. This is the definitive history of the Academy: it deserves a place on one's shelf, or inside one's Kindle. Mr. Davis’s magnum opus is essential reading for any serious cinephile.”
— Robert Harris, Motion Picture Archivist

“With the skill and wit of a great story teller, Bruce Davis transports us into the secret boardrooms filled with powerful moguls and charismatic stars, the screenwriters and directors, the cinematographers and visionary scientists who frame-by-frame crafted the movies into the art form we cherish today. Here is the fascinating tale of how the coveted golden statuette of Oscar almost wasn’t and came to be. How I wish I had known this history when I joined the Academy. Pure magic!”
— Kathy Bates, Oscar recipient, past Academy Governor

“I recommend this book to everyone who loves the movies and the Oscars!”
— Walter Mirisch, Academy President 1973-1977

“This wonderful book is often funny, sometimes shocking, and always incredibly informative as we get the inside story at the Academy, from its humble beginnings at the Biltmore, to its eventual phenomenal industry success.”
— Ed Begley, Jr., Actor, and three-term Academy Actors branch governor

"The real issue for the Oscar telecast, according to the Academy’s 22-year executive director Bruce Davis, author of the just-published—and dead-on accurate—The Academy and the Award: The Coming of Age of Oscar and the Academy of Motion Picture Arts and Sciences, is the disparity between the top box-office movies and the movies that are winning Oscars.”
— IndieWire

“This account by a former executive director of the Academy of Motion Picture Arts and Sciences is an interesting and detailed one. . . . How did the Oscar get its name? What exactly are the Jean Hersholt and Irving Thalberg awards? Almost as intriguing are the sections about the extremely short presidential term of Bette Davis (she had a cup of coffee in the role, leading only one board meeting) and an explanation of how the Oscar statuette was designed.”
— Seattle Book Review

"An author with a deep affinity for and knowledge of movies and how they’re honored tells us all about Oscar. Davis keeps things both informative and entertaining with plenty of interesting factoids."
— The Arts Fuse

“Bruce Davis' new book, The Academy and the Award, provides movie fans, film historians, and all those interested in American arts and culture with the first-ever comprehensive account of the history and evolution of the academy. . . . Davis is not only a supremely confident guide to the Oscars’ history but an engaging and entertaining narrator as well. His prose is consistently colorful and often novelistic in its vivid scene-setting and descriptive detail.”
— Washington Examiner

“An erudite and witty look at the Academy’s history, The Academy and the Award is a vital chronicle of film history that will be sought after by American history aficionados and film fanatics alike. Davis has combined meticulous research with a dynamic narrative to reveal the compelling personalities of the actors, writers, directors, and filmmakers who comprised the Academy during its formative era.”
— Public Libraries Online