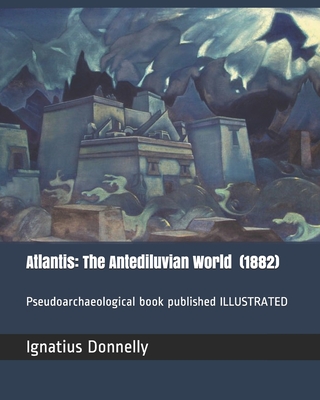 Atlantis: The Antediluvian World is a pseudoarchaeological book published in 1882 by Minnesota populist politician Ignatius L. Donnelly, who was born in Philadelphia, Pennsylvania in 1831. Donnelly considered Plato's account of Atlantis as largely factual and suggested that all known ancient civilizations were descended from this lost land.Many of its theories are the source of many modern-day concepts about Atlantis, including these: the civilization and technology beyond its time, the origins of all present races and civilizations, and a civil war between good and evil. Much of Donnelly's writing, especially with regard to Atlantis as an explanation for similarities between ancient civilizations of the Old and New Worlds, was inspired by the publications of Charles tienne Brasseur de Bourbourg and the fieldwork of Augustus Le Plongeon in the Yucatan. It was avidly supported by publications of Helena Blavatsky and the Theosophical Society as well as by Rudolf Steiner. Donnelly's work on Atlantis inspired books by James Churchward on the lost continent of Mu, also known as Lemuria. More recently, his theories have influenced the visions of Edgar Cayce, creation of the superhero Namor the Sub-Mariner, the 1969 pop song "Atlantis" by Donovan, the 2001 film Atlantis: The Lost Empire and the plot of the 2009 film 2012 by Roland Emmerich. Graham Hancock's Fingerprints of the Gods proposes, like Donnelly, that civilizations in Egypt and the Americas had a common origin in a civilization lost to history, although in Hancock's book the civilization was not located in the northern Atlantic....ignatius Loyola Donnelly (November 3, 1831 - January 1, 1901) was an American Congressman, populist writer, and amateur scientist. He is known primarily now for his fringe theories concerning Atlantis, Catastrophism (especially the idea of an ancient impact event affecting ancient civilizations), and Shakespearean authorship, which many modern historians consider to be pseudoscience and pseudohistory. Donnelly's work corresponds to the writings of late 19th and early 20th century figures such as Helena Blavatsky, Rudolf Steiner, and James Churchward.Life and careerDonnelly was the son of Philip Carrol Donnelly, an Irish Catholic immigrant who had settled in Philadelphia, Pennsylvania. His sister was the writer Eleanor C. Donnelly. On June 29, 1826, Philip had married Catherine Gavin, a second generation American of Irish ancestry.After starting as a peddler, Philip studied medicine at the Philadelphia College of Medicine. He later contracted typhus from a patient and died at age 31, leaving his wife with five children.Catherine provided for her children by operating a pawn shop. Ignatius, her youngest son, was admitted to the prestigious Central High School, the second oldest public high school in the United States. There he studied under the presidency of John S. Hart, excelling primarily in literature.Donnelly decided to become a lawyer, and became a clerk for Benjamin Brewster, who later became Attorney-General of the United States. Donnelly was admitted to the bar in 1852. In 1855, he married Katherine McCaffrey, with whom he had three children. In 1855, he resigned his clerkship, entered politics, and participated in communal home building schemes. He quit the Catholic Church some time in the 1850s, and thereafter was never active in any religious group.Donnelly moved to the Minnesota Territory in 1857 amidst rumors of financial scandal, and there he settled in Dakota County. He initiated a utopian community called Nininger City, together with several partners. However, the Panic of 1857 doomed the attempt at a cooperative farm and community, and left Donnelly deeply in debt.His wife Katherine died in 1894. In 1898, he married his secretary, Marian Hanson....