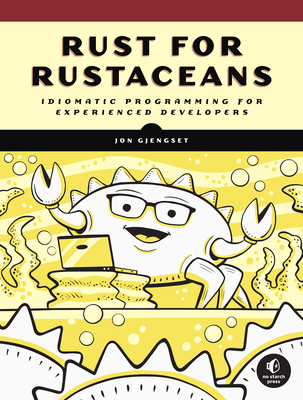 For developers who’ve mastered the basics, this book is the next step on your way to professional-level programming in Rust. It covers everything you need to build and maintain larger code bases, write powerful and flexible applications and libraries, and confidently expand the scope and complexity of your projects.

Author Jon Gjengset takes you deep into the Rust programming language, dissecting core topics like ownership, traits, concurrency, and unsafe code. You’ll explore key concepts like type layout and trait coherence, delve into the inner workings of concurrent programming and asynchrony with async/await, and take a tour of the world of no_std programming. Gjengset also provides expert guidance on API design, testing strategies, and error handling, and will help develop your understanding of foreign function interfaces, object safety, procedural macros, and much more.

Brimming with practical, pragmatic insights that you can immediately apply, Rust for Rustaceans helps you do more with Rust, while also teaching you its underlying mechanisms.

Jon Gjengset has worked in the Rust ecosystem since the early days of Rust 1.0, and built a high-performance relational database from scratch in Rust over the course of his PhD at MIT. He’s been a frequent contributor to the Rust toolchain and ecosystem, including the asynchronous runtime tokio, and maintains several popular Rust crates, such as hdrhistogram and inferno. Jon has been teaching Rust since 2018, when he started live-streaming intermediate-level Rust programming. Since then, he’s made videos that cover advanced topics like async and await, pinning, variance, atomics, dynamic dispatch, and more, which have been received enthusiastically by the Rust community.

David Tolnay, who reviewed the book’s technical content, is a prolific, well-known, and respected contributor in the Rust ecosystem who maintains some of the most widely used Rust libraries, including syn, serde, and anyhow. He is also a member of the Rust library team.

"You'll learn dozens—probably hundreds—of things about how to improve your Rust programming by reading this book."
—Tim McNamara, author of Rust in Action

"One of Rust's weaknesses as a language is there's a lot of beginner content and a lot of advanced content, but any intermediate content is just nonexistent or requires quite the struggle to learn. Jon Gjengset has done a wonderful job of distilling those next steps into an easy to read book."
—Michael Gattozzi, Senior Software Engineer, Fastly

"For a long time, people have asked me what they should read after The Rust Programming Language. Rust for Rustaceans is that book. This book will teach you how to effectively *use* Rust, after you've understood the core syntax and semantics of the language itself. Rust has a rich number of tools for you to choose from, and Rust for Rustaceans will show them all off, and teach you how to properly take advantage of all the richness Rust has to offer."
—Steve Klabnik, co-author of The Rust Programming Language

"Rust for Rustaceans is such a good book (for folks who already know rust)!"
—Ron Bowes, @iagox86