Torah like Fire and Water: The Lubavitcher Rebbe on Rashi and Rambam (Hardcover) 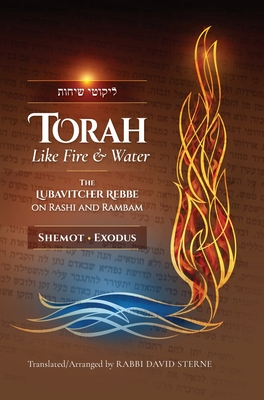 For more than forty years, from 1950 when he took over leadership of the Chabad/Lubavitch movement until he left this world in 1994, the Lubavitcher Rebbe presented us with his Torah discourses, or sichot. The sichot were usually delivered orally to his band of followers, the Lubavitch Chassidim, who then memorized and committed the discourses to writing. The writing was then checked and edited by the Rebbe and prepared for publication. In this manner was born the series of Torah volumes called Likutei Sichot of the Lubavitcher Rebbe. The discourses cover literally every aspect and detail of Torah scholarship, from "simple" textual analysis to rabbinic exegesis and to deep esoteric explanations. The Lubavitcher Rebbe's grasp was truly revolutionary and opened up new and fruitful grounds for scholarly investigation and creativity. Since the Rebbe was in constant contact with all the leading Torah luminaries of the twentieth century, his Torah both built upon and expanded and complemented their Torah. From the thirty nine volumes of Likutei Sichot, which are in Hebrew and in Yiddish, Rabbi David Sterne has culled sixty five discourses from Bereishit (Genesis) and another sixty-five from Shemot (Exodus) and translated them for the English speaking world. In flowing and logical English, he has made it easy for both the neophyte and the educated Torah scholar to discover the Rebbe's genius and translate it into his/her everyday life.