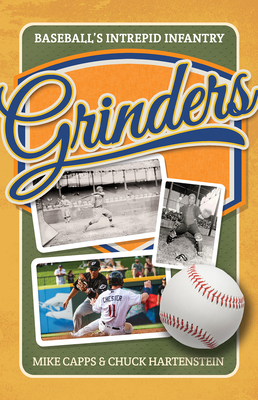 Grinders: Baseball’s Intrepid Infantry tells the tales of the game's unheralded foot soldiers who took the hard knocks road, bouncing between the Show and obscurity, never quite achieving their dreams, all for a chance to play the game they love.

On a brutally humid summer night in 1960, a nine-year-old Mike Capps was sitting with his grandfather in the rickety, mosquito-infested Burnett Field across the Trinity River from the twinkling lights of the concrete and steel towers of downtown Dallas.

When he glanced at his grandfather’s scoresheet, something caught his attention. His grandfather had made check marks alongside names of six or seven players for both clubs.

“I also want you to pay attention to the names I have checked here,” his grandfather said. “These guys will travel back and forth between Dallas and Kansas City and Minneapolis and Boston all summer. You’ll even see their names in the box scores. They aren’t stars, but they are the engine that drives baseball’s bus.”

The comment buried itself in Capps’ psyche for decades, and, sixty years later, formed the basic idea for this book. What his grandfather called baseball’s “engine” we now call “grinders.” The back-and-forth roller coaster ride between professional baseball’s minor leagues and its nirvana, Major League Baseball, remains perplexingly difficult for a multitude of great players and their families.

Players like Deacon Jones, Brian Mazone, and Lorenzo Bundy battled their way to a chance in the big leagues and hung on as long as they could. Some shared the love of the game with their sons, who became Grinders in their own right. Grinders fill every roster at every level, plugging away year after year. Without their grit, determination, and persistence, there would be no stars. These are their stories.

MIKE CAPPS has been the play-by-play voice of the AAA Round Rock Express for 21 seasons. He’s worked for the Texas Rangers, the Houston Astros and ESPN Radio. He worked in radio and television news for 22 years at ABC, CNN and stations in Dallas and Houston, covering the first Gulf War, the Branch Davidian siege and 16 Space Shuttle missions, including the Challenger disaster. Capps is also the co-author, with Red Murff, of The Scout: Searching for the Best in Baseball.
CHUCK HARTENSTEIN pitched for 15 years as a reliever for the Chicago Cubs, the Pittsburgh Pirates, the St. Louis Cardinals, the Boston Red Sox and the Toronto Blue Jays. He later worked as a pitching coach and scout in both the minor and major leagues and was voted into the University of Texas Athletics Hall of Honor in 2004.

"Whether you’re an avid fan or a casual follower of the sport, you’ll find the stories captivating."
—USA Today Sports

"This wonderful book is for anyone who has ever pursued a dream, for anyone who has ever relentlessly believed in themselves when almost no one else did. Baseball fans will view the game, not through the eyes of superstars, but from the point of view of men who pursued their craft endlessly, tweaking this, trying that, riding buses for hours, for that moment when all the work and sacrifice were validated by stepping onto a Major League diamond for the first time or the hundredth. It’s for all of us that love the game, and it’s for the countless players, parents, spouses and kids who supported those pursuits."—Richard Justice, Texas Monthly, former columnist for MLB.com and the Houston Chronicle

"With elements of Rudy and The Natural, this book takes an earnest, hard-scrabble look at the humble, hard-working kid and the underdog who overcomes impossible odds to achieve an improbable dream. As a child, Mike Capps’ grandfather told him stories about Grinders …“the engines who drive the baseball bus.” Told through the eyes of a CNN reporter and a veteran baseball announcer, this narrative explores personal stories about grit and perseverance, and the unstoppable desire to win. The tale of the Grinder applies to every profession and dream—a must-read for kids and adults who are grinding away at life."—Anne Keene, author of The Cloudbuster Nine: The Untold Story of Ted Williams and the Baseball Team That Helped Win WWII

“No writer who has ever lived has properly captured the glories of America’s great game of baseball. But Mike Capps’ new book on Grinders comes real close. He does it by turning his experienced eye away from the superstars and onto players whose love of the game is bigger than the Yankees’ payroll. These are the stories of the “Grinders,” struggling to make the big show, never giving up, always doing the hard work, and loving every blessed moment on the diamond. They make baseball what it is, and Capps knows them as well as he knows our great game. You don’t need to love baseball to love this book. Capps has hit a two-out, bottom-of-the-ninth, walk-off homer.” —James Moore, New York Times bestselling author

"Grinders are the soul of baseball and no one can tell their story better than Mike Capps and Chuck Hartenstein. The dedicated overachievers profiled in this special book will lift the hearts of everyone with baseball burned into his core to the point it will lift the reader up out of his easy chair and make him give a standing ovation for the unsung guys who are the glue that holds our National Pastime together."  —Talmage Boston, Media Member, Texas Baseball Hall of Fame
“Speaking for Grinders everywhere, thank you for telling our stories because lots of great stories come from our ranks. At the end of the day, we represent the common man in baseball.”—Travis Driskill, former Major League pitcher

“Fans of the baseball are dazzled by the extraordinary talents of the most accomplished players. Yet without the Grinders of the game, where would the stars be? Those Grinders fill out every roster at every level and have from the beginning of the game — players who plug away, year after year, persevering and succeeding through tenacity and grit. You will read in this book the stories of a few of the Grinders that have found a way or made one, exhibiting not just grit, but bravery, honor, and style as they have slogged away at their chosen endeavor, doggedly, happily, even joyously, doing what they loved, even when others may not have fully appreciated their dedication, endurance, or contributions.”—Former Texas League President Tom Kayser


“Baseball has many traditions and examples that personify successful achievement. Mike Capps has captured the “grinding mentality” that will inspire not only baseball fans but people of all ages to achieve their dreams. As a 15-year executive in professional baseball, I had the privilege of witnessing players grind their way to the big leagues. But this isn’t a just a baseball book, it’s a book that details the day to day commitment it takes to become successful at any goal you might have, by using examples in baseball. Capps has absolutely revealed wonderful lessons through very entertaining profiles. You want to be an MVP in your field? Read this book!”  —John Allgood, Academic Director, Executive Sports Business at Temple University and former Executive Director of the Oklahoma City RedHawks

“What Mike Capps has done in encapsulating what a true base “Grinder” is with the people that are written about in this book is simply amazing. Readers will truly enjoy these great stories about amazing baseball men and baseball families.”  —Gene Watson, Vice President/Assistant General Manager, Kansas City Royals