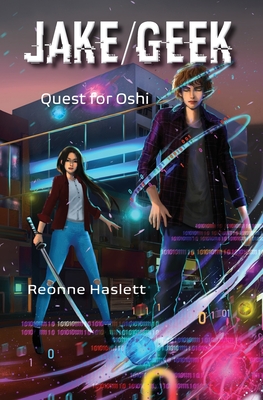 Jake Green is a cyber genius with all the geek cred a 15-year-old can handle. Since his parents' divorce he's focused on hacking for the sheer thrill of it, until one day his best friend, Oshi O'Malley, goes missing. Jake's convinced a virus he planted in a rival's laptop is the cause of Oshi's disappearance. He won't stop till he finds her, including breaking into a top-secret military base using psychic cloaking, an implanted microchip, and futuristic spyware from the Department of Paranormal Research at Stanford University.

With the help of a fugitive hacker and his high-end gear, Jake discovers a 25-year-old classified experimental project called ENERGENX, where human subjects were transported into the World Wide Web, never to return. Jake suspects Oshi's disappearance is connected to one of the developers of ENERGENX, Buckminster Stone.

As the hours turn into days, Jake realizes he must enlist the help of his flamboyant 11-year-old sister, Sara, and his 14-year-old protege, Paulie Schwartz, if he is to find Oshi in time. Jake's beliefs are shaken to their core when he enters the particle transmutation pod from the ENERGENX experiment and drops into the World Wide Web, where he fends off creepy avatars and defies Stone in a battle for his brain. Will Jake find Oshi in time-and will they come out of this alive?

"If there was a moment in my life where I would do anything-be stung by a thousand bees, jump off a fifty-foot-high cliff into a baby pool, have my teeth pulled out with pliers-I would do it, if it meant I could help Oshi. I focus any energy I have left into trying to remember my Revenge Virus. And then, instantaneously, the code lights up in my head."