The First Americans Were Africans: Expanded and Revised (Paperback) 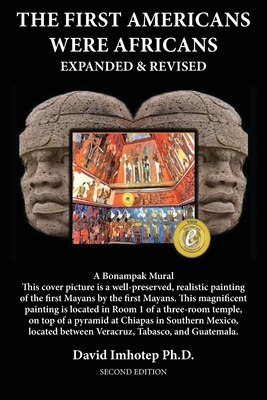 B&W Edition. The First Americans Were Africans: Expanded & Revised, written by a brilliant African American scholar, David Imhotep, who holds a Ph.D. Of course, Dr. Imhotep is not the first person to draw attention to the African presence in the Americas before Columbus. Dr. Imhotep's thesis is by far the most revolutionary viewpoint ever published on this subject. After colossal Negroid stone heads were first excavated in Mexico in the 1860s, several Latin American scholars began to speculate that Africans had sailed to the New World in ancient times. Unlike his predecessors he does not claim that Africans simply sailed to the Americas before Columbus and influenced the native Americans who resided in the New World. He states, instead, that the Native Americans themselves were Black Africans who first reached the New World at least 130,000 years ago. Citing skulls and skeletons, footprints in lava, campsites, genetic markers, linguistics, paintings, carvings, architecture and Egyptian writing, artifacts and structures.