Nut Job: How I Crushed My Food Allergies To Thrive (Paperback) 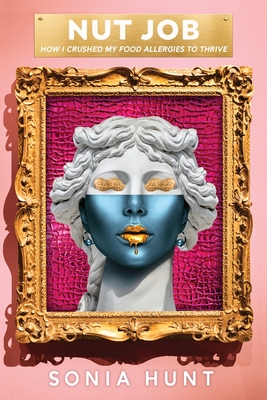 Every three minutes, a food allergy reaction sends someone to the emergency room. Each year in the United States, 200,000 people require emergency medical care for allergic reactions to food. Approximately 90% of food allergy reactions occur to one of eight common foods in the U.S. called "The Big 8". These foods include Milk, eggs, peanuts, tree nuts, fish, crustacean shellfish, wheat, and soy. And while 1 in 10 adults have a food allergy, nearly twice as many adults think that they are allergic to foods while their symptoms may suggest food intolerance or other food-related conditions.

It's time to wake up to the fact that food in the United States is killing us.

I am one of over 32 million Americans who suffer from severe food allergies, environmental allergies, and asthma since the age of three. As a first-generation American, I was the "broken child" of parents from hailed from India and had never heard the words "food allergy" before. My entire life had been focused on one thing: making sure my body could withstand another attack. Because there is no cure for food allergies in Western medicine, for four decades, I became a test subject, was poked and prodded to determine the best way to manage my allergies.

After I found myself almost dead on the emergency room table (for the fourth time) in 2008, I knew that it might be the last chance I would get to find another way. I felt like I was doing everything wrong. I was doing life wrong. Apparently, I wasn't managing my food allergies well because I wouldn't have been back in the hospital. It was yet another traumatic event in my life due to food, and I had officially hit rock bottom. It was during that time that I made a pact: I whispered into the Universe that if it allowed me to survive that day, I would change everything.

With a fire finally lit in my soul, I completely dissected and overhauled my life created the Three to Be(TM) Program, a holistic health, and well-being program that guides people with food allergies and food restrictions to Be Healthy, Be Safe + Be Well(TM) (my mantra), in order to thrive. I needed a program that I could follow daily, using small steps to reclaim my health. None of the existing health and wellness programs on the market really catered to someone in my situation, so I created my own having dealt with severe food allergies for four decades.

In facing the demons that had been with me for so long, with conviction, I took charge, I worked my program, and I eliminated my food allergies. In reclaiming my health, I transformed my life. And this is how I did it.