Pillage of Hope: A Family History from the Trail of Tears, Slavery, Segregation, the 1921 Race Massacre and Beyond (Paperback) 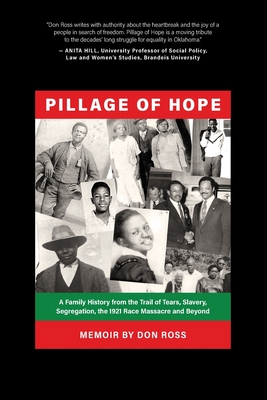 Don Ross was an Oklahoma State Legislator for over 20 years, a civil rights activist, and a journalist. "Pillage of Hope" is a testimony to his dedication to righting this massacre's horrible wrong.

This memoir sheds light on what led to the success of Black Wall Street; the culture of white supremacist laws and culture that nurtured the enemies of the success of the Greenwood Community - BLACK WALL STREET. It all exploded on May 31st, 1921 which resulted in the decimation of an entire community and destroyed not only the legacy of those families but their generational wealth as well.

Representative Ross began telling this story in the late sixties, and when he was elected to the Oklahoma State House of Representatives in the eighties, he was given a larger microphone. Even with the larger microphone, he could not get one person or organization to stand with him to seek justice and recompense. It wasn't until he started getting traction with commissioning the "Tulsa Race Riot Report" and the building of the Greenwood Cultural Center that he starts getting buy-in from others. But even with that, people weren't as interested in telling the story or uncovering "Tulsa's Dirty Little Secret", but in what ways they can profit from his life's work and heavy lifting. The only thing that has changed is that now it's getting national attention. The profiteers are still out there, but the story is being told

The aftermath of this massacre left a permanent scar not only on the Greenwood community (which, by the way, was a 35+ block community, not just one street) but on Tulsa, Oklahoma as well. The community never fully recovered, the people were never made whole on their loss, and ironically there are lifetime residents of Tulsa who are recently hearing about the 1921 Tulsa Race Massacre. Consequently, Tulsa has not reached its fullest potential because of this hated and jealousy of a prosperous black community in the early 1900s.