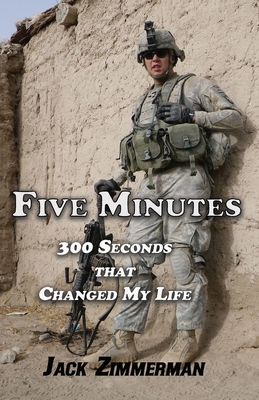 Five minutes is not a long time, especially if your life depends on something happening. With a tenuous grip on life, the doctor assured Jack that if he could stay awake for five more minutes, he would live. As an Army infantryman, Jack Zimmerman stepped on an IED while on patrol. He survived, but he was not the same. He went from a healthy young man with a bright future to a man with no legs and severely damaged arms.

"Five Minutes: 300 Seconds That Changed My Life" is the account of how Jack rebuilt his life. He knew, waking up in an Army hospital in San Antonio several days later, that everything was going to be much different than what he anticipated. With a commitment to define and shape his life into the best new version possible, he built on the attitudes and actions that reveal wisdom far beyond what you would expect from such a young age.

The principles and truths that allowed Jack to rebuild his life are described with stunning clarity, and the good news is that they apply to everyone, not just those wounded in combat. You will appreciate the sacrifice made by this soldier. You will find yourself in his struggles. You will discover the ability within yourself to turn yourself into the best version of you possible.

Friend and family provided one of the greatest resources for Jack. He was wounded two weeks after getting engaged, and his future wife was with him every day in the hospital, through all the rehab, and now as a supportive wife. A bonus is a chapter by Megan to provide the wife's perspective.