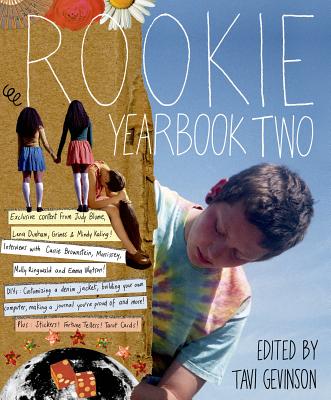 This is book number 2 in the Rookie Yearbook series.

The second book in the "Rookie Yearbook" series "Gevinson has tapped into a network of young, exuberant writers whose insight, attitude and compassion are matched by their distinctive voices and points-of-view. "Rookie" is] a great and good face for a new, vigorous, unapologetic feminism."--"Boing Boing""Rookie" is an independent online magazine made by and for teenage girls. It was created by Tavi Gevinson in 2011, when she was just fourteen years old; today, about a third of the magazine's staff are teenage writers, photographers, and illustrators.
"Rookie" launched in September 2011; six days after its dbut the site hit one million page views. One year after that, the online publication reimagined itself in deluxe print form with "Rookie""Yearbook One," an anthology of the best features from the site's first nine months, plus a sticker sheet, a flexidisc, and original artwork. Now, "Rookie"'s sophomore year is collected in "Rookie""Yearbook Two" a second anthology that's just as visually stunning as the first, and filled with even more content. Exclusive "Rookie""Yearbook Two "celebrity content will include contributions by Judy Blume, Grimes, Lena Dunham, Mindy Kaling among others, making it a truly special product.
Like the site itself, the "Rookie" yearbooks combine personal essays by young girls; advice about style, sex, friends, and school; fashion; gorgeous photo albums; humor and pathosin other words, everything a teenage girl thinks and cares about. "Rookie""Yearbook Two" collects interviews and contributions from notable adults including Morrissey, Emma Watson, Molly Ringwald, Carrie Brownstein, the astrophysicist Neil deGrasse Tyson, award-winning cartoonist Chris Ware, and Museum of Jurassic Technology founder David Wilson.
On its second birthday, "Rookie" averages more than 450,000 unique visitors, and 1.2 million visits per month (and counting) with 205,000 Tumblr followers. The "Rookie" yearbooks reach that audience and beyond, spanning a diverse group who may have found "Rookie""Yearbook One" on the shelves of their local library or been given the book as a gift from an adult who laments not having "Rookie" around when they were a teenager.

Tavi Gevinson is the editor and founder of Rookie. She lives in Oak Park, Illinois, with her family and many piles of candy bar wrappers.

“Irreverent, honest, and wholly affirming, this is a book that teen girls will cherish.” —School Library Journal