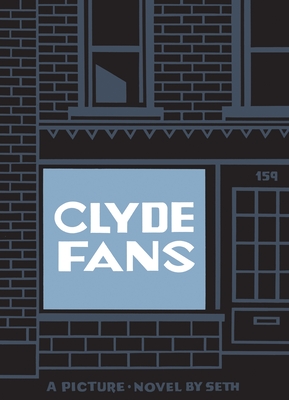 "A masterwork… Clyde Fans is a brilliant trip."—Brian Seznick, The Invention of Hugo Cabret


Legendary cartoonist Seth’s magnum opus Clyde Fans appeared on twenty best of the year lists, including The New York Times, The Guardian, and Washington Post. The first graphic novel nominated for the Giller, Canada’s prestigious national fiction prize, it was also nominated for the Eisner and Trillium Awards.


Clyde Fans peels back the optimism of mid-twentieth century capitalism, showing the rituals, hopes, and delusions of a vanished middle-class—garrulous men in wool suits extolling their wares to taciturn shopkeepers. Like the myth of an ever-growing economy, the Clyde Fans family business is a fraud. The patriarch has abandoned it to mismatched sons, one who strives to keep the company afloat and the other who retreats into his memories.


Abe and Simon Matchcard are brothers, struggling to save their archaic family business selling oscillating fans in a world switching to air conditioning. Simon flirts with becoming a salesman as a last-ditch effort to leave the protective walls of the family home, but is ultimately unable to escape Abe’s critical voice in his head. As Clyde Fans Co. crumbles, so does the relationship between the two men, who choose very different life paths but both end up utterly unhappy.


Seth’s intimate storytelling and gorgeous art allow cityscapes and detailed period objects to tell their own stories as the brothers struggle to find themselves suffocating in an airless home.

Seth is the cartoonist behind the comic book series Palookaville and Clyde Fans, the first graphic novel nominated for the Scotiabank Giller Prize. His comics have appeared in the New York Times Magazine, Best American Comics, and McSweeneys Quarterly. His illustrations have appeared in numerous publications including the cover of the New Yorker, the Walrus, and Canadian Notes & Queries. He is Lemony Snicket's partner for the series All the Wrong Questions. He designs several classic comics reprint series, notably collections of work by Charles Schulz, John Stanley, and Doug Wright.

He was the subject of a National Film Board documentary entitled Seth's Dominion. Seth lives in Guelph, Canada, with his wife Tania and two cats in a house he has named Inkwell's End.

"Clyde Fans is a masterpiece of storytelling that reinvents a medium as it goes along. Seth is one of Canada's great storytellers and writers who bounds from strength to strength. We are lucky to have him in our world."—Douglas Coupland

"A tour de force that captures the strange sadness of nostalgia and how it betrays the past and makes the present unobtainable. Seth masterfully recreates the lives of two brothers—one too rough, the other too weak—by illuminating painfully bleak isolated moments in hotel rooms, coffee shops, and highways. He also chronicles collections of tiny knick knacks and household objects in mundane montages that will break your heart with their beauty. The drawings are a feat of wonder, their composition built on the architectural blueprint of loneliness."—Heather O’Neill author of The Lonely Hearts Hotel

"A sprawling yet intimate work of melancholy beauty... an impressive, beautifully constructed volume that is certain to be a benchmark for much of what will follow in graphic fiction."—Winnipeg Free Press

"Readers will be dazzled by this impressive graphic novel... This isn’t just a story, or even, as it terms itself, a “picture novel”—it is a brilliant journey into the heart of midcentury darkness."—Publishers Weekly starred review

"Though Seth fills his comics with old buildings, vintage logos, and retro-looking toys, all drawn in a deft ink-and-wash style that would be at home in a New Yorker magazine from the 1940s, Seth uses these visual cues to draw the reader into stories that explore richer and deeper territory than mere longing for the past."—Publishers Weekly

"Rich with the melancholy and sad swagger of great salesmen stories like Death of a Salesman and Glengarry Glen Ross, Clyde Fans is fueled by its interrogation of, and nostalgia for, the past."—Lit Hub