East Coast Crafted: The Essential Guide to the Beers, Breweries, and Brewpubs of Atlantic Canada (Paperback) 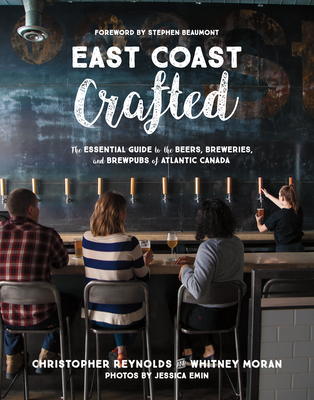 From the pioneering breweries of historic downtown Halifax to the distinct merroir of rural Prince Edward Island, from the banks of New Brunswick's St. John River to the far-flung iceberg alleys of Newfoundland, East Coast Crafted features behind-the-scenes profiles of each of Atlantic Canada's nearly 70 breweries and brewpubs. With a fun, narrative style, authors Christopher Reynolds (Cicerone, beer judge, co-owner, Stillwell beer bar) and Whitney Moran (beer journalist and editor) get to know the people behind the pints and offer readers dozens of recommendations as they explore their favourite suds from across the region. The result is the first comprehensive guide to Atlantic Canada's evolving craft beer industry, an ideal read for beer tourists and local champions of Canada's fastest-growing craft beer-producing region.

Whitney Moran is an editor and journalist based in Halifax, Nova Scotia. She spent half a decade working in Halifax's craft beer industry, has written extensively about local beer and breweries for The Coast, the Halifax Chronicle-Herald, and Occasions magazine, and has sat on judging and tasting panels in her home province. Whitney lives near Peggys Cove with her beer-loving partner and their Old English sheepdog. Visit whitneymoran.ca. Christopher Reynolds is a former magazine editor turned professional beer nerd. He is a recognized BJCP beer judge, a Certified Cicerone, and the co-owner of Stillwell, Atlantic Canada's most celebrated beer bar. He is also a home brewer gone pro, with the recent launch of saison-focused Stillwell Brewing Co.