Patriots, Traitors and Empires: The Story of Korea's Struggle for Freedom (Paperback) 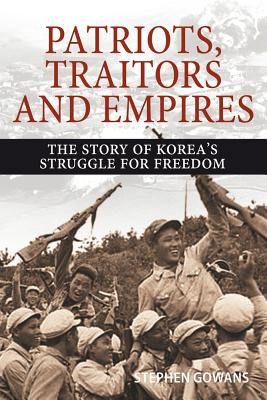 Patriots, Traitors and Empires is an account of modern Korean history, written from the point of view of those who fought to free their country from the domination of foreign empires. It traces the history of Korea’s struggle for freedom from opposition to Japanese colonialism starting in 1905 to North Korea’s current efforts to deter the threat of invasion by the United States or anybody else by having nuclear weapons. Koreans have been fighting a civil war since 1932, when Kim Il Sung, founder of the Democratic People’s Republic of Korea, along with other Korean patriots, launched a guerrilla war against Japanese colonial domination. Other Koreans, traitors to the cause of Korea’s freedom, including a future South Korean president, joined the side of Japan’s Empire, becoming officers in the Japanese army or enlisting in the hated colonial police force. From early in the 20th century when Japan incorporated Korea into its burgeoning empire, Koreans have struggled against foreign domination, first by Japan then by the United States. Patriots, Traitors and Empires, The Story of Korea’s Struggle for Freedom is a much-needed antidote to the jingoist clamor spewing from all quarters whenever Korea is discussed.

Stephen Gowans is an independent political analyst whose principal interest is in who influences formulation of foreign policy in the United States. His writings, which appear on his What’s Left blog, have been reproduced widely in online and print media and have been cited in academic journals and other scholarly works. Some articles have been translated into many languages.

“Washington’s Long War on Syria is a well-researched and deeply considered analysis of the tragedy that has befallen Syria. Stephen Gowans reveals the political and economic interests that are motivating Washington’s intervention in Syria. No praise is too high for this much-needed corrective to Western propaganda. This fascinating book is a must-read for anyone seeking a deeper understanding of the war in Syria.” Gregory Elich is on the Board of Directors of the Jasenovac Research Institute and the Advisory Board of the Korea Policy Institute.

“It is always refreshing to read Stephen Gowans. … he does his homework and his writing is well-documented and far from the well-intentioned fluff that litter too many websites. He is careful to situate his subject within its context and he has a good eye for discerning what is important and what is of lesser consequence. These virtues are exemplified by his latest book… Stephen Gowans has written a marvellous and incisive study of modern Korea.” —Tim Beal, author of Crisis in Korea (Pluto Press, 2011)

"Stephen Gowans is not a writer to mince words or to defer to mainstream distortions. He makes no concessions to the standard self-serving Western narrative, and this is one of the reasons his work is so consistently refreshing. Gowans is also noted for his careful research and masterly knack for deploying information in support of logical analysis. Patriots, Traitors and Empires is no different in those respects. His book is an impassioned call for justice, imbued with a deeply felt sympathy for the Korean people and their struggle for freedom." —Gregory Elich, Zoom in Korea, Critical News and Analysis of the Korean Peninsula

"A highly recommended read for armchair historians and history scholars alike. Very informative and worth a 5-star rating. Patriots, Traitors and Empires goes on my 2018 longlist for a “The Very Best Book Award for Non-Fiction." —James Fisher, The Miramichi Reader