Murder on the Inside: The True Story of the Deadly Riot at Kingston Penitentiary (Paperback) 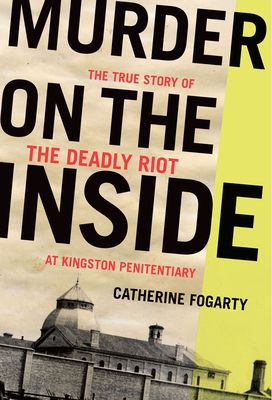 "You have taken our civil rights--we want our human rights."

On April 14, 1971, a handful of prisoners attacked the guards at Kingston Penitentiary and seized control, making headlines around the world. For four intense days, the prisoners held the guards hostage while their leaders negotiated with a citizens' committee of journalists and lawyers, drawing attention to the dehumanizing realities of their incarceration, including overcrowding, harsh punishment and extreme isolation. But when another group of convicts turned their pent-up rage towards some of the weakest prisoners, tensions inside the old stone walls erupted, with tragic consequences. As heavily armed soldiers prepared to regain control of the prison through a full military assault, the inmates were finally forced to surrender.

Murder on the Inside tells the harrowing story of a prison in crisis against the backdrop of a pivotal moment in the history of human rights. Occurring just months before the uprising at Attica Prison, the Kingston riot has remained largely undocumented, and few have known the details--yet the tense drama chronicled here is more relevant today than ever. A gripping account of the standoff and the efforts for justice and reform it inspired, Murder on the Inside is essential reading for our times.

Catherine Fogarty is a storyteller. She is the founder and president of Big Coat Media, with offices in Toronto, Los Angeles, Vancouver, and North Carolina. An accomplished television producer, writer and director, Catherine has produced award-winning lifestyle, reality and documentary series for both Canadian and American networks.Catherine is the executive producer of the Gemini nominated series Love It or List It. In addition to that franchise, Catherine has produced several other lifestyle and documentary series including Animal Magnetism (W Network), My Parents' House (HGTV), and Paranormal Home Inspectors (Investigative Discovery Canada). Catherine also produced and directed I Don't Have Time for This, an intimate documentary about young women with breast cancer.Originally trained as a social worker, Catherine studied deviance and criminology. She worked with numerous at-risk populations including street youth, people with AIDS, abused women, and social services.Catherine holds an MA in Social Work, an MBA in Human Resource Management, and an MFA in Creative Non-Fiction from the University of Kings College. She was recently awarded the Marina Nemet Award in Creative Writing through the University of Toronto.