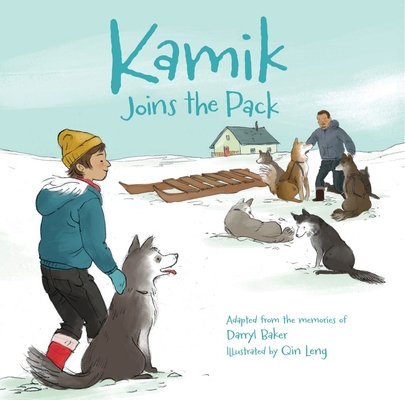 Jake can't wait for his uncle to meet Kamik, and to see what an obedient puppy he is becoming. Jake's uncle is a great musher, who has won many dog sledding races, and if Kamik is good enough, Jake hopes today might be the day that Kamik finally gets to run with a dog team!

Following Kamik: An Inuit Puppy Story and Kamik's First Sled, Kamik Joins the Pack continues the story of Jake and his puppy Kamik as they learn from their elders everything they need to know to some day be part of a winning sled dog team.

Darryl Baker is an Inuit teacher in Arviat, Nunavut. He was born in Churchill, Manitoba, and raised in Arviat. In 2006, Darryl graduated from the Nunavut Teacher Education Program and he has been teaching at the Levi Angmak Elementary School since. Besides his career as a teacher, he enjoys dog mushing and has been an active participant in Hudson Bay Quests and other dog team races between Rankin and Arviat.Qin Leng was born in Shanghai and lived in France and Montreal. She now lives and works as a designer and illustrator in Toronto. Her father, an artist himself, was a great influence on her. She grew up surrounded by paintings, and it became second nature for her to express herself through art. She graduated from the Mel Hoppenheim School of Cinema and has received many awards for her animated short films and artwork. Qin has always loved to illustrate the innocence of children and has developed a passion for children’s books. She has illustrated numerous picture books for publishers in Canada, the United States, and South Korea.