Safe Space: A True Story of Faith, Betrayal, and the Power of the Force (Paperback) 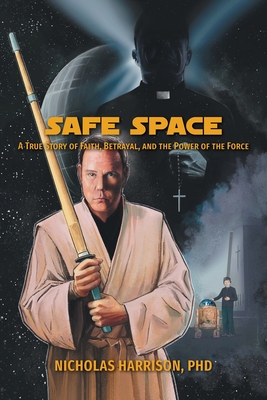 Nicholas was nine years old when he accidentally walked into a movie theatre playing Star Wars: A New Hope. It was 1977, and he unknowingly had just stumbled upon the thing that he would later credit in saving his life.

From kindergarten through grade four, Nicholas endured horrific abuse at the hands of the Catholic priests who were entrusted with his education. As he grew up, he blamed himself for what had been done to him. His childhood had been stolen from him, and he had no way to cope. Star Wars gave Nicholas hope at the time he needed it most.

His path to healing has been long and often dark, but that band of Rebels he met in his childhood proved to him that light could ultimately triumph. In this shocking, heartbreaking, yet forever hopeful memoir, Nicholas takes readers with him on his journey from victim, to survivor, to Jedi.

Safe Space: A True Story of Faith, Betrayal, and the Power of the Force is for anyone who wants to understand how abuse continues to affect victims and their families long after the act.