Thirteen Plays by Ibsen, including (complete and unabridged): Peer Gynt, Pillars of Society, A Doll's House, Ghosts, An Enemy of The People, The Wild (Hardcover) 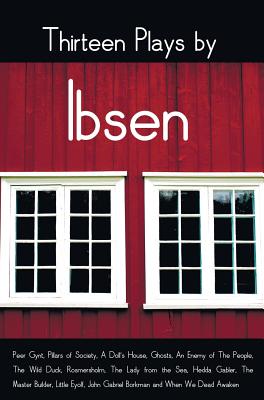 By Henrik Ibsen
This item is not available.

Blurb: Henrik Ibsen (1828 - 1906) was a major 19th-century Norwegian playwright, theatre director, and poet. He is often referred to as "the father of realism" and is one of the founders of Modernism. He is the most frequently performed dramatist in the world after Shakespeare, and A Doll's House became the world's most performed play by the early 20th century. At the time that they were written, several of Ibsen's plays were scandalous. The theatre was expected to model strict morals of family life and propriety; but Ibsen explored the realities that lay behind the fa ades, making his plays uncomfortable to watch. Ibsen was born into a merchant family in Skien, a port town in Norway, and many of his plays are set in places reminiscent of his family home. Ibsen is widely considered to be the greatest playwright since Shakespeake and influenced scores other writers including: George Bernard Shaw, Oscar Wilde, Arthur Miller, James Joyce, Eugene O'Neill and Miroslav Krleza. This volume brings together his thirteen greatest plays.