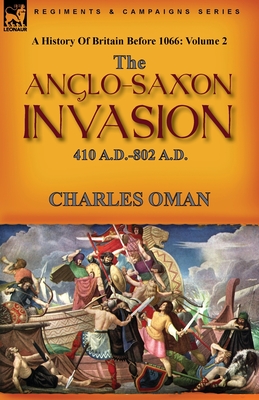 The second volume of Oman's trilogy

Professor Charles Oman's exemplary credentials as an historian require no elaboration. His substantial volume of the history of Britain, embracing over 1,000 years of history and culminating in the Norman Invasion of 1066, is a masterful, authoritative work on the subject. Mindful of the specialised interests of readers and students of history, Leonaur has divided that work into three separate books, each one of which concentrates on a principal troubled period in detail: The Roman Invasion, The Anglo-Saxon Invasion and The Danish Wars. The second volume commences with an account of the invasion of 410 A.D. before describing the settlements of the conquerors and their first wars. In 577 A.D. another advance began bringing about the fall of Ceawlin at the Battle of Deorham and Aethelfrith's victories at Dawston and Chester. Oman then discusses the power balances between Mercia, Northumbria and Wessex prior to the domination of Mercia in the 8th century.

Leonaur editions are newly typeset and are not facsimiles; each title is available in softcover and hardback with dustjacket.