Hounded: My lifelong obsession with Sherlock Holmes And The Hound of The Baskervilles (Paperback) 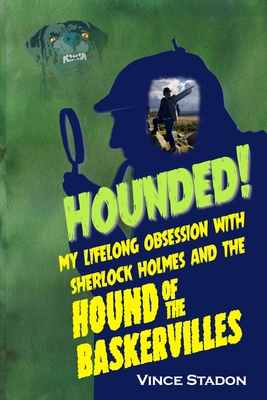 By Vince Stadon
This item is not available.

"I think my wife might be right. I am going slightly mad."

Hounded is an escape from the anxiety of reaching a half-century, written during the pandemic of 2020 and into the spring of 2021, during which comedy writer Vince Stadon experienced every film, TV, audio drama, spoken word reading, documentary, stage play, pastiche, graphic novel, animation, kids cartoon, and PC game version of The Hound of the Baskervilles.

A quirky, funny and unique memoir about Spectral Hounds, Consulting Detectives, panic attacks and way too many cats, Hounded is a bewildered middle-aged man's silly odyssey through a binge experience of every conceivable version of Sir Arthur Conan Doyle's celebrated novel.

As the world darkens and he gleefully immerses himself in the fiction of the fog-drenched mystery, Vince Stadon undertakes a marathon of the most famous Sherlock Holmes story of them all; he makes deductions, adopts disguises, sends anonymous 'Beware the moor' letters to Canadians, steals footwear, learns Sherlock Holmes's favoured martial art, and he tracks the Hound across the melancholy moor during those dark hours when the forces of evil are exalted.

Along the way, Vince remembers his childhood, tries to understand his mysterious and troubled father, gets to grip with chronic anxiety, and strives to keep sane and calm during a pandemic.

* A ridiculous number of footnotes.