The Knights of Heliopolis (Hardcover) 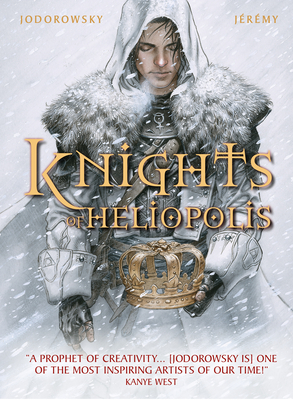 By Alejandro Jodorowsky, Jérémy (Illustrator)
$39.99
On Our Shelves Now

The next incredible graphic novel from acclaimed writer Jodorowsky puts a supernatural spin on The Man in the Iron Mask - all four volumes published together in English for the very first time in this complete edition! "A prophet of creativity... [Jodorowsky is] one of the most inspiring artists of our time!" - Kanye West

The 18th century. In a monastery in the North of Spain hides the sacred temple of the Knights of Heliopolis: an assembly of immortal alchemists cut off from the world. As disciple Seventeen prepares to complete his training and integrate order, his master Fulcanelli reveals to the other knights the terrible secret of his origins - Seventeen is actually the hidden son of King Louis XVI and Marie-Antoinette! Will the young heir claim the throne or remain in the shadows, faithful to the millennial precepts of Alchemy?

Based on one of the greatest myths in the history of France, a romantic destiny that acclaimed writer Jodorowsky brilliantly rewrites as a grand esoteric fable.

“No one alive today demonstrates artistic invention as powerfully as Alejandro Jodorowsky.” – NPR

Alejandro Jodorowsky is a French-Chilean film-maker, playwright, actor, author, musician, comics writer and spiritual guru. He is best known for his controversial avant-garde films - including his first feature, Fando y Lis, which was banned in Mexico, and El Topo in 1970, often regarded as the first ever classic midnight cult movie. He has established himself as a notable comic writer with The Incal, the seminal work of the comic book medium, created in conjunction with the late Moebius, often cited as the greatest comic ever written. Other works include Technopriests and Metabarons. Jodorowsky is also involved in psychological therapy using his own personal system called Psychomagic or Psychoshamanism, which is derived from his interest in alchemy, tarot, Zen Buddhism and shamanism.

Jérémy, born in 1984, started alongside Philippe Delaby as a colorist at just 17 years old. While working on coloring projects, he took the time to produce a comic strip about pirates, Barracuda, written by Jean Dufaux. On the death of his master Philippe Delaby, Jérémy agreed to complete the 21 remaining plates from volume 4 of the second cycle of La Complainte des landes perdus. After completing the Barracuda series with a sixth volume, he began Knights of Heliopolis, with Alejandro Jodorowsky writing the script.

“Begins as a riff on The Man in the Iron Mask but quickly twists, turns, and defies easy categorization. It includes mystical rituals, a secret history of the world, talking gorillas, an exploration of sex and gender roles, and brutal brawls between superhuman combatants. Fun to read and epic in scope.” - Library Journal Starred Review

"Shot through with provocative spins on historical figures ... traversing a timely subtext around gender identity ... This transcendent if bloody tale of duplicity and redemption takes adventure comics fans on an appealing and entertaining voyage" - Publishers Weekly

“Fantastical, thrilling and just a lot of fun ... a beautiful new approach to the classic story without compromising on its intrigue or swashbuckling fun” - Comic Book Resources

“A roller coaster of a ride” - Geek Native

“‘The Knights Of Heliopolis’ is a work of great imagination with terrific, colourful, dramatic art” -SFcrowsnest

“Assassin’s Creed On Acid ... a masterpiece and another stunning publication from Titan Comics” - Comicon.com