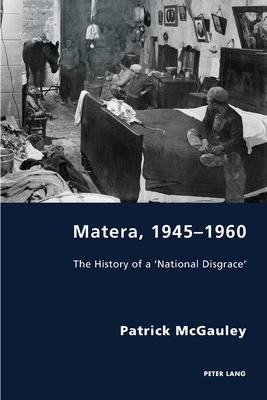 This is book number 31 in the Italian Modernities series.

The southern Italian city of Matera was dubbed a national disgrace in the immediate post-war period due to media and political focus on its distinctive cave homes, the Sassi, which housed an estimated 15,000 people in the early 1950s. The Italian government implemented a rehousing programme for Matera's cave dwellers in 1952. As a result, the Sassi were gradually emptied and the local population was rehoused in purpose-built rural villages and urban quarters. However, the rehousing programme was beset by numerous problems and was never fully completed.

This book explores how and why Matera came to be viewed in such negative terms and investigates the impact this had on the city's social and urban development. Drawing on previously neglected primary sources, it charts the discursive construction of Matera as a national disgrace in the context of post-war Italy's complex political landscape, renewed interest in the southern question, and narratives of the Italian nation. These themes are examined through the lens of recent scholarship in the history of emotions, the history of nationalism, urban history, and the new southern history.

Patrick McGauley holds a PhD in Italian studies from University College London. He is originally from Wicklow Town, Ireland and currently lives in London.