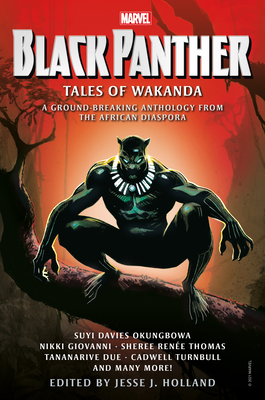 A ground-breaking anthology celebrating Marvel’s beloved Black Panther and his home of Wakanda, penned by an all-star cast of authors such as Sheree Renée Thomas and Nikki Giovanni.

T’Challa faces the gods of his parents. Vampires stalk Shuri and a Dora Milaje in voodoo-laced New Orleans. Erik Killmonger grapples with racism, Russian spies, and his own origins. Eighteen brand-new tales of Wakanda, its people, and its legacy.

The first mainstream superhero of African descent, the Black Panther has attracted readers of all races and colors who see in the King of Wakanda reflections of themselves. Storytellers from across the African Diaspora—some already literary legends, others who are rising stars—have created for this collection original works inspired by the world of the Panther and its inhabitants. With guest stars including Storm, Monica Rambeau, Namor, and Jericho Drumm, these are stories of yesterday and today, of science and magic, of faith and love.

These are the tales of a king and his country. These are the legends whispered in the jungle, myths of the unconquered men and women and the land they love.

These are the Tales of Wakanda.

Jesse J. Holland is a bestselling non-fiction author, longtime comic book and science-fiction fan, and the writer of the children's novel Star Wars: The Force Awakens - Finn's Story, co-author of the late, lamented-by-no-one-except-a-couple-of-diehard-fans collegiate comic strip Hippie and the Black Guy. He is a Race & Ethnicity reporter with The Associated Press in Washington, D.C and currently lives in Bowie, Maryland, with his wife and children.

"It’s well worth your time, especially if you are a fan"
Financial Times

"Absolutely filled to the brim with brand new stories... giving voices to those who are not just diverse because they are Black but because of the various cultural backgrounds and experiences they bring to the table." Culturess

"This anthology should sate fans longing for the next 'Black Panther' installment."  3/4 Stars, USA Today

"I was engrossed, and devoured this novel in about a day. Some of that is due to the title character… The rest is that Hudlin created a compelling story that Holland was able to translate incredibly well to the written page." Patrick Hellen, AIPT for Black Panther: Who is the Black Panther?

"Jesse J. Holland’s riveting book The Invisibles shines a long overdue light on the enslaved men and women who were forced to serve in the nation’s seat of executive power." J.D. Dickey, author of Empire of Mud: The Secret History of Washington, DC

"Although some slaves’ lives have been lost to history, Holland creates a vivid portrait of many, including William Lee, who worked as Washington’s ‘body servant’…" Kirkus for The Invisibles