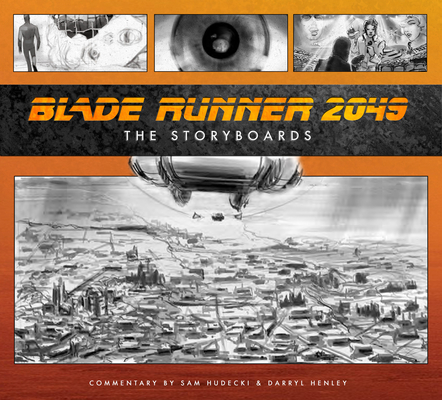 Blade Runner 2049: The Storyboards is the only book presenting all of the storyboards from the film.

In 1982, film audiences experienced a bold new depiction of the future with the ground-breaking Blade Runner, which was fundamental in establishing the still-vibrant Cyberpunk movement. With the critically acclaimed Blade Runner 2049, director Denis Villeneuve further explored that unique "future noir" world, this time following a young blade runner whose discovery of a long-buried secret leads him to track down former blade runner Rick Deckard--the protagonist of the first film--who's been missing for some thirty years.

Blade Runner 2049: The Storyboards is a celebration of the rarely-seen artwork that was key in building the harsh, yet strangely beautiful, environments in the film. This remarkable book presents a fresh look at Blade Runner 2049, including scenes that were later altered or cut out entirely, along with new, in-context commentary from storyboard artists Sam Hudecki and Darryl Henley throughout.

Sam Hudecki has gained some renown as a storyboard artist and concept designer through his collaboration on Oscar winning Hollywood films, such as Blade Runner 2049, Arrival and Sicario. His career has taken him from behind the camera to drawing out the first interpretations of a screenplay in visual form.