Basilisks and Beowulf: Monsters in the Anglo-Saxon World (Hardcover) 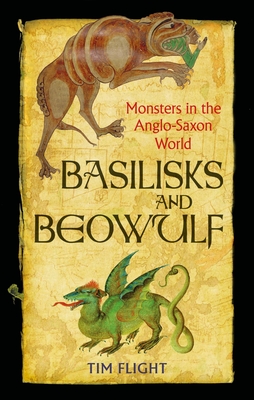 An eye-opening, engrossing look at the central role of monsters in the Anglo-Saxon worldview.

This book addresses a simple question: why were the Anglo-Saxons obsessed with monsters, many of which did not exist? Drawing on literature and art, theology, and a wealth of firsthand evidence, Basilisks and Beowulf reveals a people huddled at the edge of the known map, using the fantastic and the grotesque as a way of understanding the world around them and their place within it. For the Anglo-Saxons, monsters helped to distinguish the sacred and the profane; they carried God’s message to mankind, exposing His divine hand in creation itself. At the same time, monsters were agents of disorder, seeking to kill people, conquer their lands, and even challenge what it meant to be human. Learning about where monsters lived and how they behaved allowed the Anglo-Saxons to situate themselves in the world, as well as to apprehend something of the divine plan. It is for these reasons that monsters were at the very center of their worldview. From map monsters to demons, dragons to Leviathan, we neglect these beasts at our peril.

Tim Flight studied at Royal Holloway, University of London, and Magdalen College, Oxford, from which he obtained a doctorate in Anglo-Saxon literature in 2016. Since then, he has been writing full time and has contributed to History Today and BBC History Magazine, among many other publications.

"In this exploration of Anglo-Saxon monsters, Flight exhibits a deep knowledge of the Anglo-Saxon corpus and brings together a broad assortment of texts... Recommended."
— Choice

"Uncharted territories were not valued for their splendour, but feared for the malign forces they hosted. Flight’s book covers the range of creatures that, in the Anglo-Saxon imagination, make their home in such landscapes. From the mysterious blemmyes, headless men with eyes on their chest, to cynocephali (literally, 'dog-headed'), human-canine hybrids with cannibalistic tendencies, it shows how the monstrous is associated with the 'corruption of God’s design'—or, to put it another way, creatures that are almost like humans or animals, but not quite..."
— Times Literary Supplement

"A bold and wide-ranging expedition into the wildest corners of the early medieval mind; Flight skillfully conjures the primal fears and ancient wonders that once lurked in England’s shadowed groves and hollows."
— Thomas Williams, author of "Viking Britain: A History"

"Although he wears his learning lightly, Flight covers an impressive amount of ground to bring us his thoughtful, stimulating account of monsters in the early medieval world. Moving from Beowulf’s historical context, through maps, wolves, dragons, devils, and the Grendelkin to present-day fears, Basilisks and Beowulf opens up a strange and yet hauntingly familiar world to anyone who has read the poem or any of its multitudinous offspring."
— Jennifer Neville, Royal Holloway, University of London