A Confederacy of Dumptys: Portraits of American Scoundrels in Verse (Hardcover) 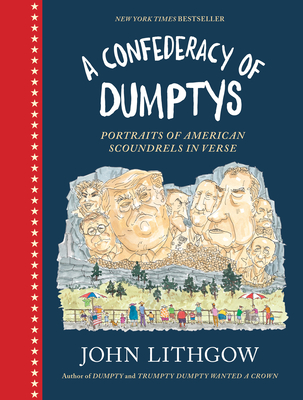 This is book number 3 in the Dumpty series.

Following the success of Dumpty and Trumpty Dumpty Wanted a Crown, award-winning actor, author, and illustrator John Lithgow presents the third book in his runaway hit series. While the blatant corruption and abuse of power of the Trump era was shocking, it was actually nothing new. In A Confederacy of Dumptys, Lithgow shifts his focus to some of the biggest scoundrels in American history, from Richard Nixon to Newt Gingrich, Leona Helmsley to the Sackler family. He deftly wields the power of the limerick and line-drawing to describe despicable events such as Watergate and the January 6th insurrection. American history, Lithgow reveals, is rife with powerful and deeply crooked men and women.

Delivered in verse filled with his trademark wit and cutting humor, and accompanied by clever illustrations, this exuberant book tells the stories—corrupt, criminal, or just plain crummy—of history’s long-forgotten villains and today’s most prominent bad actors.

BELOVED AUTHOR: John Lithgow has delighted audiences for decades, starring in hit TV series like 3rd Rock from the Sun, Dexter, and The Crown, and in critically acclaimed films such as The World According to Garp, Terms of Endearment, and Bombshell. He has published several beloved children’s books.

NOT JUST TRUMP: Where the previous books in the series took aim squarely at Trump, this book captures a wider array of present-day scoundrels and historical wrongdoers. A Confederacy of Dumptys provides plenty of entertainment and insight for the post-Trump era and serves as a potent reminder to not repeat history.

JOHN LITHGOW is an actor with two Tonys, six Emmys, two Golden Globes, and two Oscar nominations. He has starred in the hit TV series 3rd Rock from the Sun, Dexter, The Crown, and Perry Mason, and in critically acclaimed films such as The World According to Garp, Terms of Endearment, and Bombshell. Lithgow has performed on Broadway 25 times and in England with both the Royal Shakespeare Company and the National Theatre. In addition to the New York Times bestsellers Dumpty and Trumpty Dumpty Wanted a Crown, he has written nine children's picture books, and his recordings for kids have landed him four Grammy nominations.