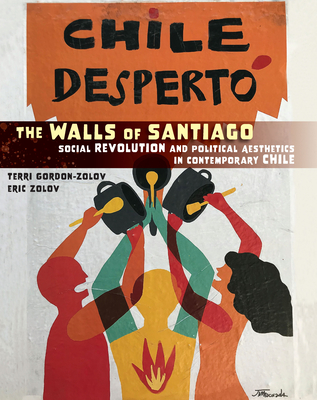 A photo-illustrated record of Chilean protest art, along with reflections on artistic antecedents, global protest movements, and the long shadow cast by Chile's authoritarian past.

From October 2019 until the COVID-19 lockdown in March 2020, Chile was convulsed by protests and political upheaval, as what began as civil disobedience transformed into a vast resistance movement. Throughout, the most striking aspects of the protests were the murals, graffiti, and other political graphics that became ubiquitous in Chilean cities.

Authors Terri Gordon-Zolov and Eric Zolov were in Santiago to witness and document the protests from their very beginning. The book is beautifully illustrated with over 150 photographs taken throughout the protests. Additional photos will be available on the publisher's website.

From the introduction:
In the conclusion, we take stock of the crisis of the nation-state in the contemporary era. This chapter brings events into the present moment, noting the ways President Pi era took advantage of the COVID-19 pandemic to reclaim the streets of Santiago, a phenomenon echoed in countries across the globe. While most of the global protest movements were forced to go underground (or into the ether), the Black Lives Matter movement surged in the United States and drew massive amounts of support both domestically and abroad, suggesting a continued wave of grassroots protests. We close with reflections on the continued relevance of walls in a virtual world, the testimonial role that protest graphics play, and the future outlook for revolutionary movements in Chile and worldwide.