Not by Omission: The Case of the 1973 Arab-Israeli War (Paperback) 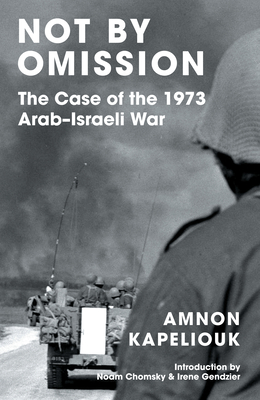 A major new reading of the 1973 war in the Middle East, an act of Israeli hubris that planted the seeds of the current crisis

In this book, first published in Hebrew in 1975 and now available in English for the first time with an introduction by Noam Chomsky, Amnon Kapeliouk traces the policies and attitudes that led to the 1973 Arab-Israel war.

He describes the multiple diplomatic overtures from Egyptian presidents Nasser and Sadat after 1967 that Israel ignored or contemptuously rejected, as well as the complacent attitude that had become fully entrenched in the Israeli military establishment.

On the political level, the triumvirate of Golda Meir, Moshe Dayan and Israel Galili feature prominently as a study in arrogance and incompetence. Kapeliouk also notes the protest movement that arose among active-duty soldiers as well as veterans in the wake of the war demanding political accountability for the failures of the war.

Finally, the book examines Israel’s policy of colonizing the territories occupied in 1967, starting with the Golan Heights and later spreading to the West Bank (“Judaea and Samaria”) and the Sinai – a policy that did much to convince the leaders of Arab states that war was their only option.

Amnon Kapeliouk was a scholar and journalist who reported on Arab affairs for the Israeli press and was a regular contributor to Le Monde and Le Monde diplomatique. He published five books on Israel-Arab relations including a biography of Yasser Arafat, which were translated into many languages. He died in 2009.

“Amnon Kapeliouk’s Not by Omission demonstrates conclusively that the 1973 Arab-Israeli War did not have to happen. Israel’s dismissal of every Egyptian peace overture gave Egyptian President Anwar Sadat no option but to launch a war if he hoped to regain the Sinai Peninsula, occupied by Israel since the 1967 Arab-Israeli War. Nonetheless, the arrogant over-confidence of Israel’s military leadership that Arab armies would not dare to attack Israel so soon after their devastating defeat left Israel unprepared for war. The most impressive achievement of Not by Omission is that is based on publicly available documentation—newspaper reports and 42 published pages (out of 1,500) of the report of Israel’s National Commission of Inquiry into the failures of the military. That is to say, diligent Hebrew-reading observers could have drawn conclusions similar to those Kapeliouk reached in real time. Why didn’t they?”
—Joel Beinin

“This superb analysis of the fateful policies of the Israeli political leadership that almost produced a national disaster in 1973 retains a crucial relevance 20 years after its original publication, and deserves the widest readership. It convincingly demonstrates that Israel rejected a golden opportunity after the 1967 War to achieve peace with its Arab neighbors as well as regional stability because of its unwillingness to forego further expansionist territorial ambitions.”
—Richard A. Falk

“Available in English for the first time, the late Amnon Kapeliouk’s study of the pivotal 1973 Yom Kippur/Ramadan War is a significant contribution to the field of Middle East Studies and deserves to be read widely. A critical yet intimate examination of Israel’s political and military leaders and thinkers, Not by Omission analyzes their failures and why they occurred, and how, for a time, they changed Israel and the Arab world particularly after Israel’s stunning victory in the 1967 war. An important work full of prescient insights that remain as relevant today as when they were first written nearly 50 years ago.”
—Sara Roy, Center for Middle Eastern Studies, Harvard University