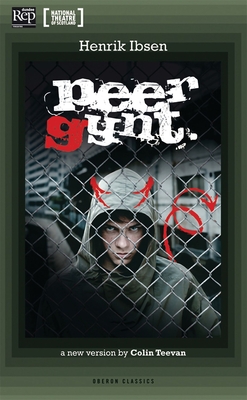 Peer Gynt is a dreamer, a liar and a serial womaniser. Cast out from his hometown, Peer embarks on a wild and astonishing journey in search of fame and fortune that takes him from Norway to Africa and eventually back home again. An exhiliarating tale of a life lived on the edge. Ibsen's classic verse play is given a radical reworking for the modern stage by Colin Teevan, one of our most vibrant and imaginative playwrights. This version of Peer Gynt opened at Dundee Rep in September 2007 in a production by the National Theatre of Scotland.

Henrik Ibsen (1828-1906) has been described as 'the father of modern theatre'. Most of his early plays were traditional historical dramas. After 'Peer Gynt', a fairy-tale fantasy in verse, Ibsen wrote the rest of his plays in prose, and came to be regarded as the great Naturalist dramatist. Colin Teevan is a celebrated playwright, translator and writer for screen. His work has been produced by many leading theatres including the National, the Young Vic, the Soho Theatre and the National Theatre of Scotland. Colin's 2009 play, The Lion of Kabul, was produced as part of the Tricycle Theatre's Great Game festival on Afghanistan and was hailed as 'an inspirational highlight of the year' by The Independent. In the same year, he adapted Franz Kafka's Report to An Academy for the Young Vic, where it appeared as the critically-acclaimed play, Kafka's Monkey, as well as reviving the National Theatre of Scotland's production of his new version of Peer Gynt at The Barbican and, subsequently, on tour. In 2010 Kafka's Monkey was revived by The Young Vic at the Bouffes du Nord Theatre in Paris and The Great Game was revived by the Tricycle for an American tour. In 2011 Colin wrote an episode of the ITV drama Vera starring Brenda Blethyn and a two-part episode of ITV/RTE crime drama Single Handed. Colin was commissioned to write an original play There Was A Man, There Was No Man for the Tricycle as part of their 2012 season of plays entitled 'The Bomb'.