Ghostbusters: The Inside Story: Stories from the cast and crew of the beloved films (Hardcover) 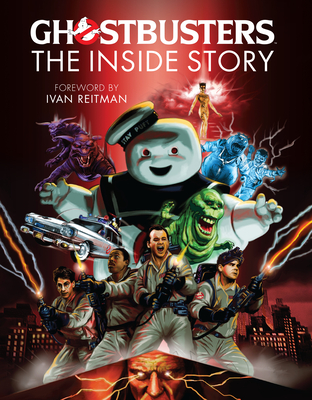 The essential guide to Ghostbusters and Ghostbusters II! Exploring everything from the pioneering special effects to the set design and the unforgettable soundtrack. This authorized book tells the exhaustive behind-the-scenes story of how Dan Aykroyd's original concept evolved into a movie phenomenon.

The perfect gift for the Ghostbusters fan in your life!

The guide is packed with hundreds of fascinating production photos, concept art and rare behind-the-scenes images, while new interviews with the cast and crew, including Dan Aykroyd, Ivan Reitman, Annie Potts, Richard Edlund and many more, reveal how they overcame numerous challenges to create one of the best-loved movie franchises of the 1980s.

From the Inside Flap


This exhaustive guide to the 1984 classic and its much-loved 1989 sequel tells the story of how Ghostbusters evolved from a dark tale about interdimensional spook exterminators to one of the great film franchises of all time.

Key cast and crew, including Dan Aykroyd, Ivan Reitman, Ernie Hudson, Annie Potts, and William Atherton, look back on the thrills and challenges of working on the movies, while the talented team of effects artists at Boss Film Studios and ILM reveal how ghosts and ghouls, such as Slimer, the Stay Puft Marshmallow Man, and the Scoleri brothers, were realized. The book also includes dazzling concept art from Thom Enriquez, Henry Mayo, Ron Croci, and others, which reveals early iterations of some of Ghostbusters’ famous designs.