Duck, Death and the Tulip (Hardcover) 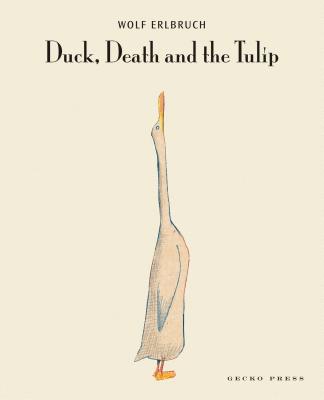 From award-winning author and illustrator, Wolf Erlbruch, comes one of the world's best children's books about grief and loss.

In a curiously heart-warming and elegantly illustrated story, a duck strikes up an unlikely friendship with Death. Duck and Death play together and discuss big questions. Death, dressed in a dressing gown and slippers, is sympathetic and kind and will be duck's companion until the end.

"I'm cold," she said one evening. "Will you warm me a little?"
Snowflakes drifted down.
Something had happened. Death looked at the duck.
She'd stopped breathing. She lay quite still.

Explaining the topic of death in a way that is honest, lightly philosophical and with gentle humor, this enchanting book has been translated into multiple languages, adapted into an animated movie and short film and performed on stages worldwide.

Wolf Erlbruch received the Hans Christian Andersen Medal in 2006 and was the winner of the Astrid Lindgren Memorial Award in 2017.

Praise for Duck, Death and the Tulip

"The gold standard of picture books about death is Duck, Death and the Tulip...It's hard to describe how this extraordinarily tender book manages to be both heartbreaking and comforting, but it does.--The New York Times

The most extraordinary picture book I've seen in many a year. A duck becomes friends with Death, and it's the most natural thing in the world. Trust me, adults get far more weirded out by this book than children ever do. Amazing.--Patrick Ness, Time Out London

The most moving book I've read this year is the German picture book Duck, Death and The Tulip by Wolf Erlbruch, about the strange, uneasy friendship.--Meg Rosoff, The Financial Times

"The German children's book author and illustrator Wolf Erlbruch offers a wonderfully warm and assuring answer in Duck, Death and the Tulip - a marvelous addition to the handful of intelligent and imaginative children's books about death and loss."--Maria Popova, Brainpickings

"Duck, Death and the Tulip by Wolf Erlbruch is a superb picture book from Germany, that tells a gentle story of the relationship between Death and a duck. Death is portrayed as a sympathetic figure in a dressing gown who is with us all the time, but who only comes into Duck's consciousness towards the end of his life. It is warm, poignant and witty."--Anthony Browne, The Guardian