No One Will See Me Cry (Paperback) 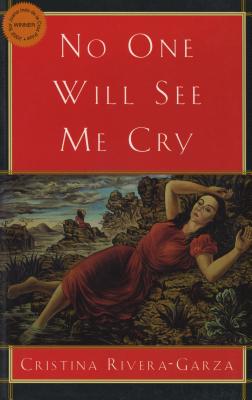 Joaquín Buitrago, a photographer in the Castaneda Insane Asylum, believes a patient is a prostitute he knew years earlier. His obsession in confirming Matilde's identity leads him to explore the clinics records, and her tragic history. Joaquín and Matilda begin to tell each other fragmented stories about a past they almost shared, and a future in which they do not believe. Set in 1920s Mexico, this novel is at once an overview of one of the most turbulent times in Mexican history, a love story, and a meditation on the ways in which medical and popular language define insanity. No One Will See Me Cry is a lyrical and startling visitation with the so-called losers of an era as they try to plumb the meaning of their lives.

Cristina Rivera-Garza is a Mexican author and professor best known for her fictional work. Her collection of short stories, La guerra no importa (The War Doesn't Matter) won the National Prize in Mexico in 1987. Her first novel, Desconocer (Forgetting) was a finalist for the Juan Rulfo Prize in 1994. A former professor at San Diego State University, Rivera-Garza is a Distinguished Professor in Hispanic Studies at the University of Houston. She is also the founder and director of the school's Creative Writing Program, the first Ph.D. program in Creative Writing in Spanish in the U.S.

Andrew Hurley is an English translator of Spanish literature, primarily known for his translations of the work of Argentine author Jorge Luis Borges. He has published over 30 book-length translations.

"One of the most notable works of fiction not only in Mexican literature but in the literature of the Spanish-speaking world at the start of the twentieth-first century ... In this novel of long dark skirts, Rivera Garza imagines, like no one else has done in Mexico since José Revueltas, the tragic options and the psychic turmoil caused by revolutionary theory and action. And she does it with such an intensity, with such a grandeur that, in conjunction with Matilda, the protagonist, we must, as readers, kneel ourselves when Diamantina dies, Cástulo gets lost, and Matilda prays for them ..." —Carlos Fuentes, El País

"No One Will See Me Cry is a novel that devours you from the first page. The reader can perceive the brutal force of a story that needs to be read with all five senses . . . [Cristina Rivera-Garza] narrates lucidity and madness like two sides of the same coin. The difference between those who are crazy and those who aren't is a blurry line that readers perceive with unease." —Nagari Magazine

"No One Will See Me Cry is an elegant work that exudes atmosphere and powerful imagery long after the last page is turned." —Albuquerque, NM Journal