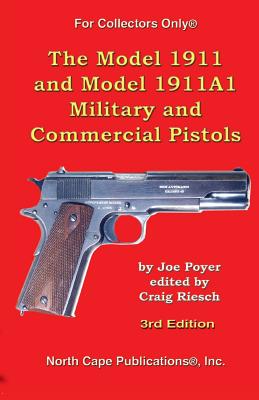 The Model 1911 and Model 1911A1 Military and Commercial Pistols, 3rd Edition, totals 566 pages. It includes 84 tables detailing parts and markings and 678 photos and drawings. This book is part of North Cape Publications, Inc.(R) For Collectors Only(R) series of books on collector's and antique firearms. Parts are described in chapters organized by subassembly receiver, slide and magazine. Serial numbers are listed in individual tables by military and the individual commercial models such as the ACE and Service ACE, National Match, .38 Super, Commander, Gold Cup, British, Argentine, Norwegian, and Canadian military models, etc. An appendix also contains a serial number listing organized by shipping date. Check to see when a pistol was manufactured, then to see when it was actually shipped. Parts are described in chapters organized by assembly receiver, slide and magazine. Each part of each assembly, i.e., trigger system, magazine release, sights, etc. are then described and photographed complete with markings and other identifying characteristics. Parts are differentiated by model and manufacturer, i.e. Colt, Springfield Armory, Remington Arms-UMC, Singer, Ithaca, Remington Rand and Union Switch & Signal. All Colt commercial model and variation parts are also described and compared to the military .45 ACP part. Serial number ranges are provided for every model and manufacturer of the Model 1911, Model 1911A1, and Series 70/80 in separate tables. Serial numbers for British military, Canadian, Argentine, Norwegian, and Russian military pistols are also given. Markings are often the key to authenticating the Model 1911/Model1911A1. All military and commercial markings are listed by date or serial number range of use in twenty-six individual tables both by military and the individual commercial models, and by other manufacturers. Individual chapters provide detailed examinations of markings on receivers, slides and barrels, including both military inspection and commercial markings, all correlated to serial number ranges. An appendix includes photographs of all slide markings. Finishes are discussed for both military and commercial pistols by serial number ranges. Accoutrements and accessories for the Model 1911 and Model 1911A1 are thoroughly explored. All belts, magazine pockets, and holsters are described and photographed. Complete listings of all U.S. military holster manufacturers--- U.S. military Model 1912, 1916, M3, M7, and M15 are included. U.S. military-issue ammunition in .45 ACP is described in detail including cartons and shipping containers. Complete listings and descriptions of all holster manufacturers are included. U.S. military-issue ammunition in .45 ACP is described in detail. The Argentine Ballester-Riguad and -Molina pistols, as well as Norwegian Models are discussed in detail and compared to the Model 1911A1. A photo-illustrated assembly/disassembly procedure shows the most efficient way to maintain the pistol. As always in the For Collectors Only(R) series any change or variation in a part is described by serial number range, making it possible to determine the authenticity of any Model 1911 or Model 1911A1 by year of manufacture.