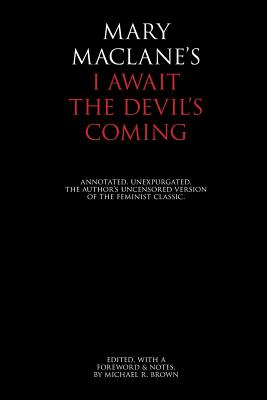 "Mary MacLane comes off the page quivering with life. She is before her time ... Moving." - London Times With her first book - written in 1901 in Butte, Montana at age nineteen - she was hailed as a marvel by the likes of H.L. Mencken, Clarence Darrow, and Harriet Monroe. She went on to become a pioneering newswoman, gambler extraordinaire, bon vivant, and a star of the silent screen. She influenced Gertrude Stein, inspired F. Scott Fitzgerald, and upon her death in 1929 was eulogized as "an errant daughter of literature ... the first of the self-expressionists, and also the first of the Flappers," as the creator of "that revolution in manners, that transvaluation of values in the female code of behavior known as the Roaring Twenties." Too radical in style for 1902, its original publisher made countless changes to the author's far-superior original - the same pacification reprinted by all other publishers. This annotated, unexpurgated affordable edition makes Mary Mac-Lane's striking teenage debut - "the first of the blogs" - available in its unalterd, uncompromised form. "Mary MacLane's first book was the first of the confessional diaries ever written in this nation, and it was a sensation." - N.Y. Times editoral "Anyone who reads her will never forget her voice." - Biographile "She reminds us of the power of personal narrative, honestly told." - The Atlantic "In a pre-soundbite age she already knew how to draw blood in one direct sentence." - The Awl "She had a short but fiery life of writing and misadventure, and her writing was a template for the confessional memoirs that have become ubiquitous." - The New Yorker "One of the most fascinatingly self-involved personalities of the 20th century." - The Age "A girl wonder." - Harper's "Confessional journalists have people like Mary MacLane to thank." - Flavorwire "Her diaries ignited a national uproar, ushering in a new era for women's voices. Her elegant, ambitious embrace of full-disclosure opened a door to what was possible for women." - The Atlantic "Fiery frankness made her a pioneer." - Time Out Chicago "Her poetry is one of extremes: lust for happiness, despair for life." - Hairy Dog Review "Riveting." - N.H. Public Radio "I Await The Devil's Coming is a small masterpiece, full of camp and swagger." - Parul Sehgal, NPR "Pioneering newswoman, later silent-screen star, considered the veritable spirit of the iconoclastic Twenties." - Boston Globe "A pioneering feminist - a sensation." - Feminist Bookstore News "First of the self-expressionists, and the first of the Flappers." - Chicagoan Check www.marymaclane.com for exclusive content, news, and previews.