Hollywood Rides a Bike: Cycling with the Stars (Hardcover) 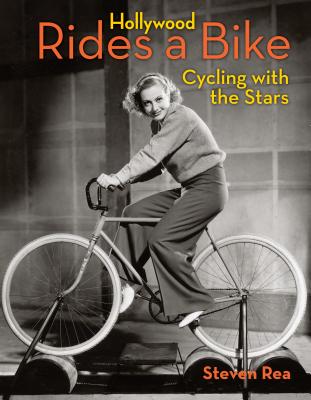 As National Public Radio puts it, "Bikes have come to connote coolness, urbanity and romance." And as a senior executive at one of those world-class advertising agencies opines, "Everyone loves a bike--sometimes it's a metaphor, sometimes it's an archetype."

But come on, people Hollywood always knew the appeal of the bicycle That's the "why" of film critic Steven Rea's homage to Hollywood on two wheels (okay, sometimes three wheels), Hollywood Rides a Bike: Cycling with the Stars. This image-filled tome is proof positive that Hollywood, well, yes, pedaled its wares, long before biking became ber-trendy. Rea has assembled the ultimate tribute to twentieth-century foxes and a universal collection of cycles . . . these photos of film folks on spokes are sure to be treasured by fans of all ages, genders and persuasions. Already the leader of the bike pack online with his universally recognizedRides a Bike blog on Tumblr, Rea has preserved the best in Hollywood's documented cyclology in these pages, never to be lost in cyberspace.

Hollywood Rides a Bike shows classic stars--from Shirley Temple, Betty Grable, and Brigitte Bardot to Bogie, Gable, and Bing--on wheels, then proves there's way less than six degrees of separation between Kevin Bacon and all the best bikes Hollywood prop shops have to offer. One hundred twenty-five rare vintage photographs will make bicycle lovers drool over classic models and one-of-a-kinds. Then, especially for cycling aficionados, there's a special index just about the bicycles Not to disappoint movie fans, another index is devoted to the book's Who's Who of Hollywood stars.

For everyone who ever pedaled to the movies, ate popcorn in a cinema, or watched a classic movie channel, Hollywood Rides a Bike is a coffee table must-have. In fact, it's a double-copy must-have . . . keep an extra in your pannier for easy reference.

Steven Rea writes about movies. He is a member of the National Society of Film Critics, and he teaches film studies courses at Drexel University, and produces the popular photo blog Rides a Bike. He also rides a bike.