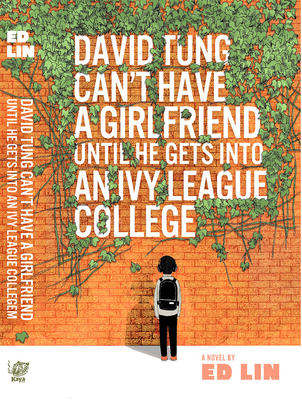 "You're not allowed to have a girlfriend until college," my mother warned. "And you'd better get into an Ivy League school "

In David Tung Can't Have a Girlfriend Until He Gets Into an Ivy League College, novelist Ed Lin conjures up "a fast-paced, acid-tongued, hilarious teen drama for our age," says Marie Myung-Ok Lee, acclaimed author of Somebody's Daughter and Finding My Voice. Both playful and wryly observant, Ed Lin's YA-debut explores coming-of-age in the Asian diaspora while navigating relationships through race, class, and young love. David Tung, our nerd-hero, is a Chinese American high-school student who works in his family's restaurant, competes for top grades at his regular high school located in an upscale, Asian-majority New Jersey suburb, and attends weekend Chinese school in NYC's working-class Chinatown. While David faces parental pressures to get As and conform to cultural norms and expectations, he's caught up in the complicated world of high school love triangles--and amid these external pressures is the fear he will die alone, whether he gets into Harvard or not