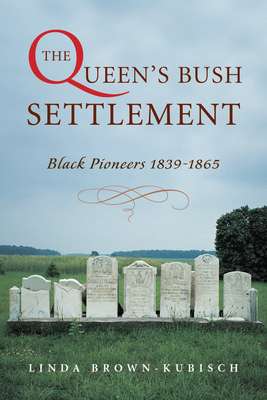 The Black pioneers (1839-1865) who cleared the land and established the Queen's Bush settlement in that section of unsurveyed land where present-day Waterloo and Wellington counties meet, near Hawkesville, are the focus of this extensively researched book. Linda Brown-Kubisch's attention to detail and commitment to these long-neglected settlers re-establishes their place in Ontario history. Set in the context of the early migration of Blacks into Upper Canada, this work is a must for historians and for genealogists involved in tracing family connections with these pioneer inhabitants of the Queen's Bush.

In the 19th century one of the most important areas of settlement for fugitive American slaves was the Queen's Bush, then an isolated region in the backwoods of Ontario. Despite much recent attention to African-Canadian history, the Queen's Bush remains a remote territory for historical scholarship. Linda Brown-Kubisch offers a pioneering entry into that gap. With a jeweller's eye for the biological subject, Brown-Kubisch introduces the courageous Black adventurers and the hardships they faced in Canada. - James Walker, Professor of History, University of Waterloo, and author of The Black Loyalists (1976, 1992) and Race, Rights and the Law (1997).

Linda Brown-Kubisch became interested in the Queen's Bush settlement while employed at the Kitchener Public Library in Kitchener, Ontario. The staff of the library's Grace Schmidt Room of Local History frequently received queries about this community's inhabitants. Realizing that virtually nothing was known about the settlement, she began to search for information from a wide variety of sources - a process that would take several years to complete. Following her employment in Kitchener from 1987 to 1992, she moved to the United States, where she received a master's degree in history from the University of Missouri-Columbia, and then worked for a number of years as a reference specialist for the State Historical Society of Missouri. Linda wrote numerous historical and genealogical articles for both Canadian and American journals and published an entry in Organizing Black America: An Encyclopedia of African American Associations (New York: Garland Publishing, Inc.). Most recently, Linda lived with her family in Covington, Louisiana, a small town north of New Orleans, and was employed as the genealogy specialist for the St. Tammany Parish Public Library. Linda Brown-Kubisch died at her home on December 20, 2003, after a courageous battle with cancer.