Downton Abbey on Location: An unofficial review and guide to the filming locations of all 6 series (Paperback) 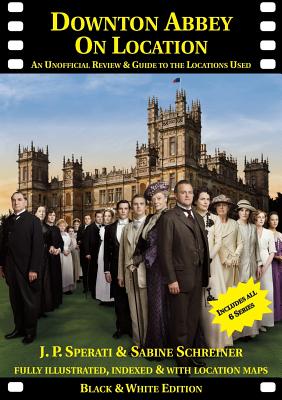 No one does period television drama like the British In the proud tradition of The Forsyte Saga, The Duchess of Duke Street, The Jewel in the Crown and Upstairs, Downstairs, the latest series to entrance viewers around the world is Downton Abbey, created by Oscar(R) winning author and actor Julian Fellowes. The story of Lord Grantham and his family centres upon Downton Abbey, their mansion in Yorkshire - but it's no secret that the magnificent house we see on screen is Highclere Castle in Hampshire, more than 200 miles away This fully researched and richly illustrated guide will enable the countless fans of Downton Abbey to find... - The 'real' Downton Abbey - in Hampshire and in Buckinghamshire - Downton Village Hall - at a former hospital in west London - Yew Tree Farm - in Oxfordshire - Downton parish church - in Oxfordshire - The Dowager Countess's house - in Surrey - Isobel Crawley's house - in Buckinghamshire and in Oxfordshire - Downton Railway Station - in West Sussex and in Kent - The Crawleys' Manchester residence - in London - Ripon Register Office - in Surrey - The Ripon solicitors' office - in London - York Prison - in Lincoln - A First World War battlefield - in Suffolk - The studios in Ealing where most of the interiors are filmed And the many other sites, including the 'real' Duneagle and Brancaster Castles in Argyll & Bute and Northumberland respectively. Downton Abbey on Location is a must for the real devotee