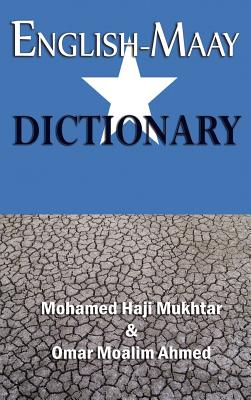 Somali people speak quite a number of languages and dialects, Maay and Mahaa being the lingua franca of the majority. In 1972, the latter was put in a written format and became the national language of the country. This experiment alienated the other Somali languages and produced tremendous disenchantment, particularly on the part of the Maay speakers. In 2003, however, the Somali Peace and Reconciliation Conference at Mbegathi, Kenya, acknowledged that Maay will be another official language of the Somali Republic. This English-Maay Dictionary is the first experiment exploring the roots of Maay language and its relationship to the other Somali dialects as well the Kushitic family of languages in the Horn of Africa. The dictionary provides over 15,000 of the most frequently used words in Maay and their English translations, with numerous examples of their every day usage. The dictionary is a vital addition to reference collections supporting undergraduate and graduate programs on African and Middle Eastern Studies. It is also an essential tool for non-Somali case workers such as those in refugee camps, immigration and naturalization officials or lawyers dealing with Somali asylum seekers. It is equally a vital tool for interpreters and translators working on court cases, hospitals and legal papers as well as for public school teachers on ESL programs that teach Maay- speaking children in English- speaking countries. ________________________________________________ Dr. Mohamed Haji Mukhtar is Professor of African and Middle Eastern History at the College of Liberal Arts and Social Sciences, Savannah State University, USA. He is the author of many scholarly books and articles including Historical Dictionary of Somalia (2003). Dr. Mukhtar, a native Maay speaker, is fluent in Mahaa, English, Arabic, Italian and some Asiatic languages such as Bahasa Malaysia. Omar Moalim Ahmed is a data processing coordinator at Quality Education Data, a Scholastic Company in Denver, Colorado, USA. An agricultural economist, Mr. Ahmed has worked as a research fellow in socioeconomic baseline study for Bay Region Agricultural Development Project (BRADP) and Juba Environment & Socioeconomic Studies (JESS). A native speaker of Maay and fluent in Mahaa, Arabic and English, Omar is also co-author of the book: Custom Rates for Farm and Ranch Operations in Wyoming, 1995-1996,