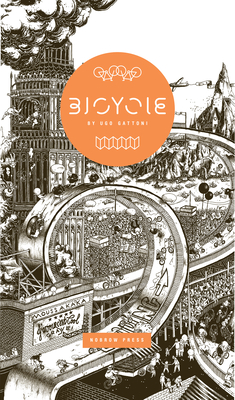 Inspired by the 2012 London Olympic Games, Ugo Gattoni intricately draws a gigantic cycle race through the streets of England's capital.

Gattoni depicts the street race to end all street races with an astonishingly detailed illustration that totals over six feet in length. As the reader's eyes travel alongside Bicycle's speeding cyclists, it soon becomes clear that this is no ordinary contest. Joining the elite athletes is a whole bunch of people including cycle couriers, commuters, bankers, delivery boys, moms with kids, youths on stolen mountain bikes, fashionistas, and hipsters riding their fixed gear bikes.

Featuring an embossed wrap-around jacket, Bicycle has been expertly manufactured in the European Union to the highest standards. Beautifully printed, this specially designed, extra-large concertina title can be read as a book or displayed as an Olympic-sized work of art.

In a brilliant alternative take on the biggest sporting event of 2012, Gattoni combines homage with humor in this two-wheeled free-for-all. With cycling only growing in popularity, both as a sport and a lifestyle, this book is an ideal gift for the bike-lover in your life.

Ugo Gattoni grew up in Vitry sur seine in the southern suburbs of Paris, France. Having studied Graphic Design at the EPSAA in Paris, he graduated in 2010 and decided to make his way in the world as an illustrator and artist. His first major exhibition included one enormous wall-sized drawing, 33 feet long and 6 feet high, rendered entirely with a black fine-liner pen.
Ugo has since gained a reputation for his detailed and surreal black and white cityscape drawings and recently completed a live drawing project at the prestigious Hayward Gallery on London’s Southbank. He has worked on big commercials projects, did some collaborations with his close friend Mcbess and also has many clients in the fashion and music industries.