The Little Guide to Dolly Parton: It's Hard to Be a Diamond in a Rhinestone World (Hardcover) 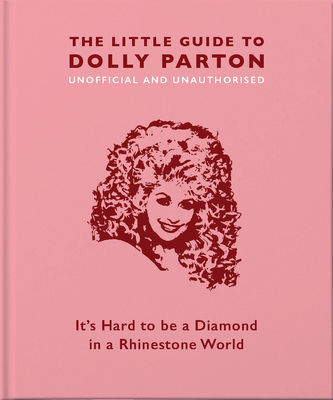 This is book number 4 in the Little Book Of... series.

The ultimate pick-me-up to save you from the nine-to-five heartbreak blues.The Little Book of Dolly Parton is your bible of devastating Dolly-isms.

Yes, that's right, the most iconic and acclaimed female country singer in the history of music is so inventive and brilliant with her clever wisecracks and sage advice that popular culture has crowned her with an -ism after her name. No one else is as worthy.

For more than five decades, Dolly has been laying down her own brand of whip-smart wit and wisdom to the world, with many quotes and quips becoming as famous as her lyrical genius, for which she has won too many song writing awards and honors to mention. Stacked to the rafters with more than 150 bite-size bon-mots, one-liners and ripostes - as well profound and sincere observations - The Little Book of Dolly Parton is your new favorite life companion.

'I never think of myself as a star because, as somebody once said, A star is nothing but a big ball of gas - and I don't want to be that.' Reflecting on stardom during an interview with Billboard, 2014.

'The kids peed on me every night ... There were so many of us. We slept three and four in the bed. I would wash every night, and as soon as I go to bed, the kids would wet on me and I'd have to get up in the morning and do the same thing ... That was the only warm thing we knew in the winter time. That was almost a pleasure to get peed on because it was so cold. Lord. It was as cold in the room as it was outside. We'd bundle up to go to bed.' Discussing her family's humble origins during an interview with Playboy, 1978.