Really Cross Stitch: For when you just want to stab something a lot (Hardcover) 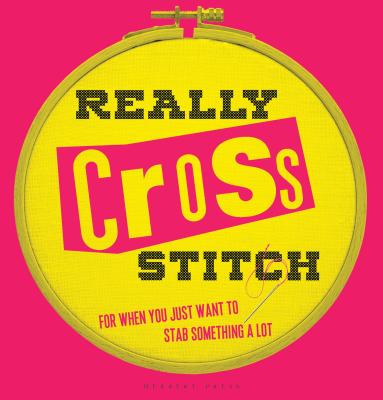 Inspired by the banners and signs at recent marches around the world, Really Cross Stitch takes all of that anger, outrage, and protest and puts it inside a decorative border . . . along with some snarky commentary and general annoyance.

Stitching for public protest is not new. First-wave feminists in the US and in Britain used needlework in their demonstrations and public protest lectures during the nineteenth and early twentieth centuries. Needlework and other handcrafts, however, declined throughout the twentieth century. But in the 21st century, there has been a steep resurgence and many are turning to crafting, especially needlework, as an activist strategy. In Knitting for Good, feminist Betsy Greer makes this point strongly when she proclaims, “I think every act of making is an act of revolution.”

Featuring more than 40 truly original cross stitch designs, the book also contains instructions on techniques for new stitchers. The projects include:
- I am very upset
- Brace yourself--women are coming
- Too many issues to fit in one place
- Nobody likes you
- No you can't take my rights, I'm still using them
- Just Urgh
- I can't believe I still have to protest this shit
- Girls just wanna have FUNdamental rights
- Damn right we're snowflakes; winter is coming!
- Gram 'em by the patriarchy
- I will not go quietly back to the 1950s
- Same shit, different century
- I'm so angry I made this
- We're not just nasty women, we're REVOLTING
- My body, my insatiable thirst for revenge
- Down with this sort of thing
-Nevertheless she persisted
- We are sisters

Rayna Fahey is a radical crafter, organiser, mother, activist, gardener, writer and lover … and that is just the start. Rayna is a do-er with heart. She mixes making with politics and friends. She gained infamy through her street art adventures in cross stitching fences. She gained further notoriety as a feature maker in the film “Making it Handmade”. Rayna came to craft from the determination to make the world a better place and this book is her love letter to those taking the struggle to the streets.